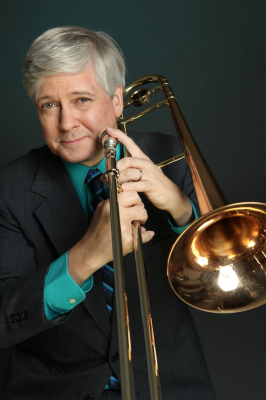 Among the top bands on Whitfield stellar resume are the Toshiko Akiyoshi Jazz Orchestra, and the new edition of Johnny Griffin’s Big Soul Band, as well as his own Scott Whitfield Jazz Orchestras (East and West). Whitfield’s discography includes 7 recordings as leader and more than 50 recordings with other artists. In addition to his own recordings, his compositions and arrangements have been performed and recorded by such artists as Diva, Maurice Hines, The Pied Pipers, Bill Allred’s Classic Jazz Band, and Pete Petersen’s 23-strong Collection Jazz Orchestra.

“Scott Whitfield is a well known trombonist, composer and singer in both the jazz scene’s of New York and Los Angeles,” said Bill Yeager, director of SDSU jazz studies. “He and his wife, Ginger, have just completed a great new recording featuring the music of the American icon, Johnny Mandel. These new vocal selections will be featured, along with the SDSU Jazz Ensemble.”

Although Whitfield makes his home in Los Angeles, he continues to commute to New York for appearances. His playing, writing, and singing have been compared to that of some of his biggest influences, including Carl Fontana, Frank Rosolino, Thad Jones, Sammy Nestico, Mel Torme, and Jack Jones. He has appeared throughout the world, from Australia to Zurich, sharing his expertise on trombone technique, improvisation, composition, arranging, and jazz history, and now comes to SDSU by special request to perform with the acclaimed SDSU Jazz Ensemble.