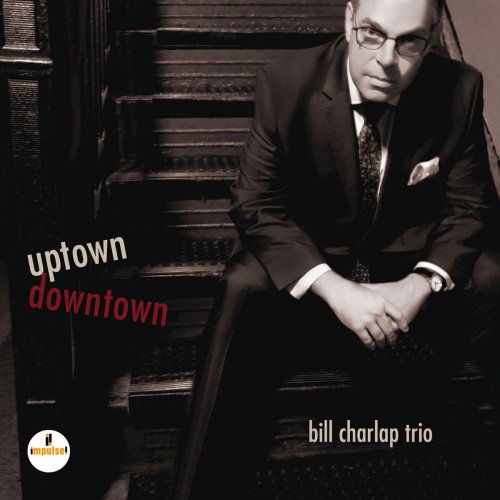 The UPTOWN-DOWNTOWN Album recently released by the Bill Charlap Trio solidifies their status as the most venerable jazz trio in or out of jazz. (Album cover courtesy of Impulse Records)

NEW YORK, NY – If you listen closely to Grammy award winning pianist and composer Bill Charlap Trio’s latest CD “Uptown-Downtown” on the Impulse Record label, a division of the Verve Label Group, his piano style connects with the works of several distinct funky players. One that comes to mind is the late George Shearing and Milt Buckner. Though best known now as a pioneering R&B organist, Buckner represented something subtle similar to what Shearing brought to the jazz scene and so does Charlap. With his style of moving block chords in parallel fashion up and down the keys, Charlap often plays in the tradition of Shearing and Buckner who provided the main inspiration for the sleek salon instruments that now uniquely defines the Bill Charlap Trio sound.

In 1997 Charlap formed his trio with bassist Peter Washington and drummer Kenny Washington, now recognized as one of the leading groups in jazz. In 2000, he was signed to Blue Note Records and received two Grammy Award nominations, for “Somewhere: The Songs of Leonard Bernstein” and “The Bill Charlap Trio: Live at the Village Vanguard.” One should not overlook the fact that Charlap is a Bebop pianist in every sense of the word if you listen to the past albums he has recorded over the past 30 years. “Uptown-Downtown” reminds us of the Bebop era, even with its emphasis on single lines and breakneck tempos, left a mark that would endure, though in distinct and idiosyncratic ways, Charlap continues the Bebop style and this album takes it into another stratosphere.

The Bill Charlap sound is very clearly articulated in this album. Take for instance music written by the late American jazz saxophonist, flautist, clarinetist, composer, arranger, and educator Gigi Gryce, called “Satellite.” Here you have Charlap breezing through intricate chords sequences, most of them built fairly close to the written changes of the song, but sometimes more cleverly conceived. The trio’s rendition of “Satellite” does feature some elegant harmonic substitutions, and Charlap’s solo is quite characteristic: Beginning with a variation on the last lick from bassist Peter Washington’s preceding chorus, the pianist extemporizes a relaxed line against unobtrusive but steady quarter-note chords in his left hand. On his second chorus, while adhering to the same dotted-eighth phrasing, he switches to a more linear conception, with figures tossed from hand to hand in a gentle but infectious sequence of rhythmic fragments.

The most impressive thing about the performance of this piece is the fact that Charlap generally maintains his trademark octave articulation of the improvised melody, through broken as well as locked chords. Though he makes it sound so easy, it’s actually no simple feat to adhere to that line while varying his approach to framing it every couple of bars. 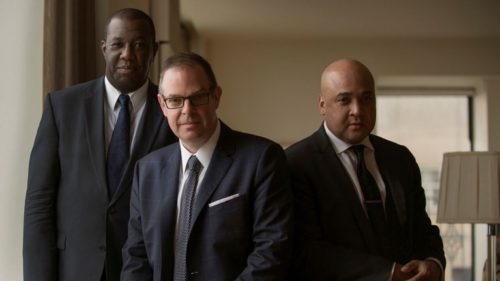 Charlap, who will be celebrating his 51st birthday with an amazing outdoor birthday party on October 15, has close to 70 albums to his credit and has performed with many of the leading artists of our time including Phil Woods, Tony Bennett, Gerry Mulligan, Wynton Marsalis, Freddy Cole and Houston Person. Born in New York City, Charlap began playing the piano at age three. His father was Broadway composer Moose Charlap, whose credits include Peter Pan, and his mother is singer Sandy Stewart, who toured with Benny Goodman, and was a regular on the Perry Como show. She earned a 1963 Grammy nomination for her recording of “My Coloring Book.” In 2005, Charlap and Stewart released the acclaimed CD, “Love Is Here To Stay” (Blue Note). Charlap is married to renowned jazz pianist and composer Renee Rosnes, and the two artists often collaborate in a duo piano setting.

“Uptown-Downtown” reminds us that Charlap can be a powerfully swinging piano player. Among the ample evidence is his performance of “The One I Love Belongs to Somebody Else” track, a delightful song with music written by Isham Jones, the lyrics by Gus Kahn. The song was published in 1924. Buoyed by Peter Washington’s assertive bass, Charlap blows through the opening chorus and sailing from there with a long solo line, crisp in execution and pearly in tone. Charlap’s melodic imagination is matched by his rhythmic vitality, which is evident as he shifts to a driving chorded solo in the second verse. On the album, he laces a reflective waltz treatment of “I’m all Smiles,” (a song written by Michael Leonard and Herbert Martin for the 1965 Broadway musical “The Yearling”) with boppish lines in no way disrupt the fragile fabric of the arrangement, demonstrating his fascination with juxtaposing jazz and Romantic aspects of music.

In the end, “Uptown-Downtown” is Charlap’s representation of the apotheosis of the conservative aesthetic, in that his work celebrates the maintenance of established standards. And it no small accomplishment to sustain the kind of enthusiasm that carried Charlap through nearly 30 years at playing professionally at the piano. With the unprecedented chops and indefatigable spirit, Bill Charlap continues to be a positive example for pianist of every style and generation.