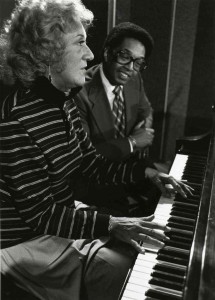 Over a career that spanned more than six decades, McPartland became a fixture in the jazz world as a talented musician and well-loved radio personality. Her legacy of achievement and advocacy on behalf of up-and-coming artists had long established her as an invaluable figure in modern culture.

In 29 years with Concord Jazz, McPartland released over 50 albums – a remarkable feat, combined with more than 30 years at the helm of “Piano Jazz,” the longest running cultural program on NPR. The long list of honors bestowed upon McPartland and the show include a George Foster Peabody Award, the Gracie Allen Award given by American Women in Radio and Television, the National Music Council’s American Eagle Award and a GRAMMY® Trustee’s Award for lifetime achievement.

“What a truly wonderful and amazing lady,” says John Burk, Chief Creative Office, Concord Music Group. “We were very lucky to have her in our lives and to be involved in such a great musical legacy.”

“I’m sad that Marian has passed away – but what an example of a life fully-lived,” Nick Phillips, Concord’s VP of A&R and Catalog Development, says. “Marian was one of the most motivated and driven artists I’ve ever worked with. She also had a super-sharp sense of humor and knew how to laugh and have a good time.”

McPartland’s first recording for Concord Jazz, From This Moment On, was released April 30, 1979. Concord also released a series of CDs selected from her “Piano Jazz” radio shows featuring legendary musicians joining McPartland for a fantastic combination of conversation and music-making. Her final Concord recording, Twilight World, which she recorded at age 89, was released March 11, 2008.

Funeral arrangements were not immediately available.

San Diego County News will publish an extensive appreciation article in the near future celebrating the life and accomplishments of the late Mrs. Marian McPartland.