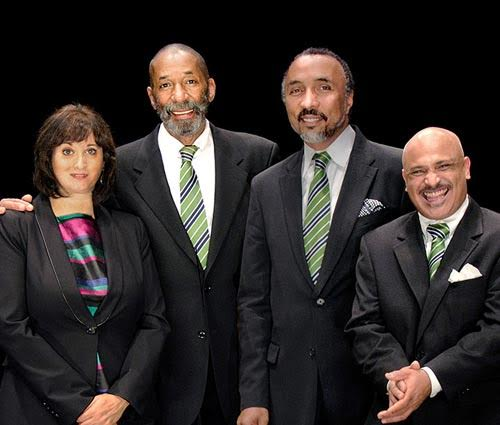 NEW YORK, NY – When Ron Carter celebrated his 79th birthday party on May 4th, he wanted everybody to join in. Which is just what occurred on May 3-8, 2016 at New York’s Blue Note Jazz Club. He played with a nonet on May 3-4, a quartet on May 5-6, and a trio on May 7-8, and through it all Ron Carter’s bass was the lead instrument which dominated all musical sessions. I was fortunate to catch Carter with his May 6 quartet which was the most vibrant version yet of that lineup – a group whose arrangements encompass a near-silent pianissimo, long crescendos and a gleeful swing.

The house was standing-room only and there was not a seat to be found when Carter and the members of the band took the stage. Band members consisting of pianist Renee Rosnes, drummer Payton Crossley, and percussionist Rolando Morales-Matos were in top form and provided mystery and delightful surprises in their musical deliveries.

The Ron Carter Quartet performed three long and extended improvised selections which dominated the 90 minutes performance. The opening selection had pianist Rosnes displaying her strong harmonic vocabulary which provided the foundation for the selection. Though often built on a simple motif, such as the droning fifths in the blues variant “Ancestors,” she opened up to a series of sophisticated changes before Carter came in.

Rosnes often breaks her left hand down to two notes or even one, while suggesting the harmony in the trajectory of her right hand. So it is in her introduction to the “My Funny Valentine” selection in which she examines a somewhat angular theme through an alteration of vividly voiced chords and stark recitations. Even when she thickens the harmony, she kept plenty of space around her more pungent dissonances, which she resolves quickly with straight-ahead chords, spare bitonalities, or even bell-like triads similar to what she did on the title track to “For the Moment.”

Carter plays his solos in the same register he’d use for walking bass lines, but with a profusion of different attacks. He might pluck lightly, or slide into notes or go skittering down the neck.  Carter has always maintained a unique voice on the bass, his great time feel, and his dedication to the music have made him a key figure in the development and preservation of jazz.  In this setting Carter and Rosnes seems to have a sense of each other which made the interlude between the two so personal – and the audience were spell-bounded through it all.

The last time I saw Ron Carter in concert was at a star-studded who’s who in the jazz and music world celebration of his music in New York City on January 9, 1995. He was 57 at the time.  Along with virtually every major bass player in New York in attendance, there was also saxophonists Jimmy Heath, Frank Wess and Javon Jackson, the vibraphonists Milt Jackson and Steve Nelson, and the pianists Harold Mabern, John Hicks, Geri Allen, Stephen Scott and Mulgrew Miller, all admirers of Carter’s musicality.

“Ron is a pivotal figure in the history of the instrument, and with Paul Chambers he shares a dominance in modern jazz,” said Ray Drummond, another bassist who was at the 1995 New York City celebration. “His musical sense of being in the right place at the right time is exceptional. There’s nobody like him.” 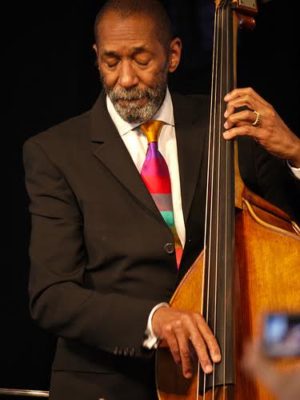 The Blue Note performance was another reminder how much Carter has grown and matured musically over the past 50 years as a composer and bandleader, who brought to the famous Miles Davis Quintet of 1963-1968 standards such as the open 24-bat blues “Eighty One” and the symmetrical “R.J,” with its 11-bar/four-bar/six-bar form.

Before the show I briefly talked with Carter about music and he stated, “It’s cool to know that somebody feels that the way you play has possibilities, that they can take an idea of yours down a path that hadn’t occurred to you and make something out of it.”

The drummer, Payton Crossley, has been with Carter for fifteen years and he’s kind of gotten to understand what it takes to make this kind of group with no horn work every night. He’s got a great drum sound and is happy to take recommendations about what the drums can sound like for the band. Payton’s serious about the music and he can play. He’s a very advanced little cat who can swing! Swinging in the illustrious, immaculate style of a Philly Joe Jones or Mel Lewis, Payton brought his exciting standards to bear on every selection he performed.

One of the things Carter told me that he learned in his early years of performing — is to always bring a flair of professionalism to each performance. “One of the things I learned from Milt Hinton and George Duvivier was how to bring an air of professionalism, class and elegance to the music. It’s not just finding the right notes, but starting on time, dressing well and always searching for something better to play.”

Playing with Carter can be an awe-inspiring and challenging experience. Legendary for his professionalism and his rigorousness, he challenges musicians to stretch and improvise, not just piece together rehearsed ideas and phrases.

“I still like seeing musicians squirm when the line they played at home doesn’t work on the bandstand,” he said. “I’m determined to change their point of view while I’m on the bandstand. I want people to deal with fresh musical ideas.”

No one was able to rise to the challenge better than Carter’s percussionist, Rolando Morales-Matos.

Rolando is from San Juan, Puerto Rico. He’s been with the Broadway Lion King production for ten years as a percussion player and as an assistant conductor. His career has taken him all over the world, from Spain to New Zealand, where he has held principal timpani and percussion positions with state orchestras. He is the recipient of the 2006 Drum Magazine World Beat Percussionist-of-the-Year Award. And he teaches school at the Curtis Institute in Philadelphia, and is on call for the Philadelphia Symphony Orchestra. So he’s a very busy person between doing gigs with other musicians besides Carter.

A reporter once asked Rolando’s mentor and close friend, the late great King of Mambo/Latin Percussionist Tito Puente – “why are you so animated on stage?” The King Puente responded, ”What else have I got to sell?”  ”I’m not Ricky Martin, to wave my hips around and show my belly button. I don’t have a girl in front of the band singing. I need the people to see I’m having a good time.”

And having a good time is one of Rolando’s signature trademarks! Rolando is a careful listener and growing up in San Juan, later playing with legendary musicians he was close to the mesmerizing and revolutionary rhythms of Bebop, Modern Jazz and New Latin Jazz. He has meshed the Tito Puente sound and the ponderous and bluesy dalliances of Ron Carter. In the Blue Note gig this Latin cat married the two, developing a distinctive swerving style that suited the chattering rhythms of Latin Jazz, a language with its own idioms and metaphors; its own spectral notes, instruments, accents and diacritical remarks that made its charts unique in all the world of sound. Rolando fine-tuned his music to such an extent that the music of no one—not even the great King Mambo (Puente)—will ever be the same again!

In watching this legendary and iconic artist, Ron Carter, do his thing in his 79th year is truly remarkable. Ron Carter’s bass has echoed over the decades like soothing and refreshing waves of the ocean on a hot balmy day. Like his mentor Charles Mingus, Carter’s music in a subtle way propels us and is continuously determined to force us to confront our fears as he has done in his life’s journey.

Danny R. Johnson is a Jazz and Pop Music Critic