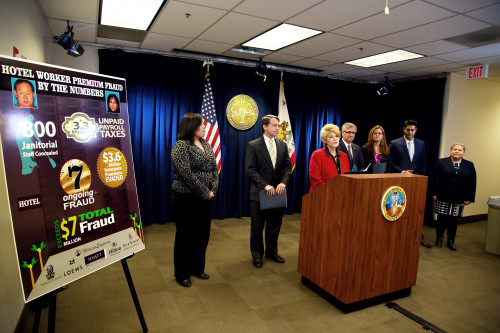 The Kwons have been indicted on 11 counts of workers’ compensation premium fraud, 18 counts of payroll tax evasion and one count of extortion. The investigation uncovered a methodical and systematic shell game involving six straw owners. These straw owners were used to conceal the existence of hundreds of hotel workers to avoid paying millions of dollars in insurance premiums and payroll taxes. If convicted of all charges, they each face up to 31 years in prison.

“These defendants lied on the backs of their employees who were cleaning rooms in some of the most prestigious hotels in California,” District Attorney Bonnie Dumanis said. “If employees got hurt on the job, they were threatened with being fired.

Insurance fraud and tax evasion is not a victimless crime.

“When cheaters scam insurance companies and lie their way out of paying taxes, ordinary citizens end up footing the bill,” DA Dumanis said. “Our insurance fraud team did an excellent job collaborating with the California Department of Insurance and state investigators to investigate and prosecute the Kwons.”

Employees who were interviewed said they were paid with checks bearing the name of businesses other than Good Neighbor Services throughout the course of their employment, even though they wore uniforms with the Good Neighbor Services’ logo and identified the Kwons as the owners. The employees also said they did not receive overtime pay or workers’ compensation benefits when they were injured on the job, and they feared retaliation if they reported their injuries. One employee said she had to repeatedly ask for medical attention for her injury. When she was finally sent to a doctor, she found out later the Kwons sent her to a dentist rather than a physician.

“The Kwons treated their workers like chattel when they fraudulently did not provide workers’ compensation insurance coverage for their workers,” said Insurance Commissioner Dave Jones.  “While hundreds of GNS employees working as janitors put in long hours to make money for the Kwons, Steven and Stephanie Kwon allegedly put the health and well-being of these workers at risk and ripped off at least $6.5 Million that should have been paid for workers’ compensation and unemployment insurance.”

The District Attorney’s Office is asking additional employees who worked with the Kwons and were denied workers’ compensation benefits to come forward. Anyone with information about the abuse of employee rights or the Kwons’ use of shell companies should call:  .

The San Diego District Attorney worked with the California Department of Insurance, Employment Development Department, Maintenance Cooperation Trust Fund, and Department of Industrial Relations to bring this complicated, underground economy case to light. The extensive amount of fraud would not have been uncovered without the efforts of these community partners.

Steven Kwon was arraigned Monday in San Diego Superior Court. Stephanie Kwon will be arraigned at a later date.

Six co-defendants have also been charged with workers’ compensation premium fraud and tax evasion. They are Melquiades Brizuela Jr, Manuel Rodriguez, Veronica Lucas Cuin, Aimee Sunmyung Kwon, Daniel Kwon and Hyun Bung Chae for their involvement in the scheme. They face sentences between six and eight years in prison. The co-defendants are expected to appear in court on January 5 in San Diego Superior Court.

The District Attorney’s Office is asking additional employees who worked with the Kwons and who may have been denied workers’ compensation benefits or who may have worked for one of the shell companies to come forward.