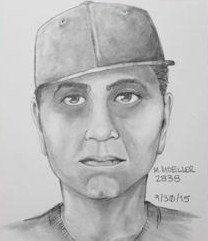 Sketch of driver who followed 17 year-old girl in Santee.

SANTEE–A male driver who followed a 17 year-old female near her Santee residence has not been found, and investigators are asking the public to help identify the suspect.

On November 8, a white Ford F150 truck with a silver tool box drove past the girl’s residence in the area of Magnolia and Tomel Court. The truck was later seen passing by the same residence two other times throughout the night.

On November 9, the female was running in the street near her residence when she recognized the same truck driving slowly behind her. As the girl began to run, the truck sped up and passed her. The girl ran home and then saw the truck as it passed her residence again.

The driver is described as a Hispanic male in his late 20s and early 30s, with a dark complexion. He was unshaven with dark short hair.

The vehicle is a 1997-2004 Ford F150 two-door truck with a silver tool box in the bed. The vehicle has a dent on the passenger side between the front wheel well and passenger door.