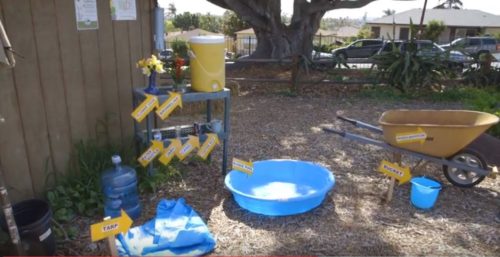 Mosquitoes in the backyard of a residence. Photo: County Human Health Dept.

SAN DIEGO–San Diego County residents now have one more reason to find and dump out standing water in and around their homes to fight mosquitoes.

County officials said they believe the mosquito is more nuisance than human health risk. However, they said it is aggressive and prefers to live and breed near people; in yards and even inside homes.

“One of the best things you can do to protect yourself from mosquitoes is to get rid of all standing water so they can’t lay eggs and breed near you,” said Chris Conlan, a supervising vector ecologist with the County’s Vector Control Program. “That means dumping water out of the saucers under flowerpots and toys laying in the yard. These mosquitoes are called the ‘backyard mosquito’ for a reason.”

County Vector Control found three adult female Australian backyard mosquitoes last week in a trap they placed in La Mesa in response to a complaint about mosquito bites. The mosquito had previously been found in Los Angeles about three years ago.

Aedes notoscriptus looks similar to the other two invasive Aedes mosquitoes; small to mid-sized, with pale markings and banded legs, and in some cases, a hairy back.

All three of the invasive Aedes mosquitoes like to live near people and, unlike San Diego County’s native mosquitoes, like to bite during daylight hours. All three can potentially transmit different diseases to people — but only if they first bite another person or animal carrying a disease they can spread.

In laboratory studies, Aedes notoscriptus has been shown to be capable of transmitting Murray Valley encephalitis, Ross River virus and Barmah Forest virus if they first bite an infected host, but those diseases have been limited to Australia and surrounding areas.

However, like the Aedes aegypti, the Aussie Mozzie is also known to transmit dog heartworm to dogs and cats if it bites an infected animal and then bites pets.