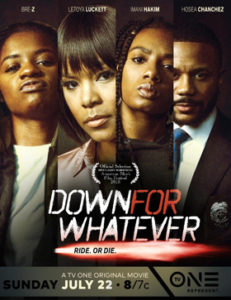 The film stars former Destiny’s Child member LeToya Luckett (Greenleaf), Hosea Chanchez (The Game), Bre-Z (Empire) and Imani Hakim (Everybody Hates Chris), and chronicles Tracy (Luckett), a young successful doctor and her police detective husband, Mike (Chanchez). Tracy grew up in foster care and longs for the traditional family environment that she never had. But when she finds out that the ruthless killers who murdered Mike’s police partner at the beginning of the film are her biological sisters, Denise (Bre-z) and Sonya (Hakim), Tracy decides to track down her sisters herself. Will she make it to them before her husband and the rest of the cops do?
Stars Imani Hakim and Hosea Chanchez talk about their experiences of making the film.