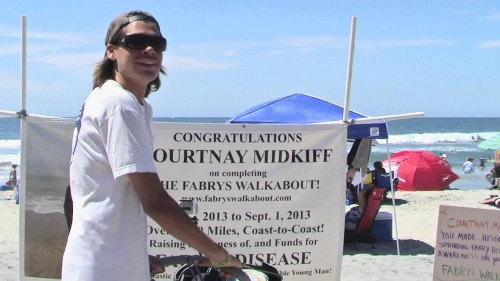 On Sunday, Courtnay Midkiff celebrated a milestone. The 24 year-old concluded his 3,000 mile journey from Virginia Beach, Virginia to Oceanside-by foot.

Midkiff says his six-month walk was to raise awareness of Fabry disease and money for the National Fabry Disease Foundation. Midkiff, his mother and brother suffer from the rare disease. At age 26, Midkiff’s brother suffered a stroke as a result of the genetic disease.

The disease affects only a few thousand people in the United States. Symptoms include the inability to sweat, fatigue, stomach problems and chronic pain in the fingers and toes. In severe cases, a person with the disease can suffer from heart attacks, strokes and kidney failure.

Despite his health, Midkiff made the trek that spanned several states with only a cart, camping tent, cell phone, and sleeping bag.

San Diego County News caught up with Midkiff in downtown Oceanside. Midkiff talked about his long trek and places he visited along the way. The full interview is on the video.