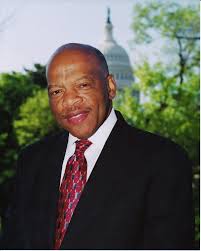 SAN DIEGO–Congressman John Lewis (GA-5) appeared at Comic Con International in San Diego on Sunday to promote his new comic, Top Shelf Productions’ “March Book One,” a graphic novel trilogy co-authored by Lewis and Andrew Aydin, with art by Nate Powell. The book is a first-hand account of Lewis’s involvement in the civil and human rights movement including the 1963 March on Washington and the 1965 march on Selma-Montgomery March.