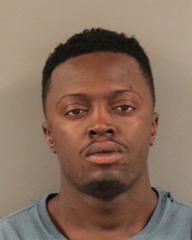 SAN DIEGO–Authorities are asking the public to be on the lookout for Demetrius B. Robertson, a.k.a. Demetrius Roberson, who escaped custody from Facility Eight, a medium security facility next to George Bailey Detention Facility in the 400 block of Alta Road in Otay Mesa.

Only inmates classified as “low-medium security” are housed at Facility Eight.

Robertson was discovered missing from his cell during a head count just before 7 p.m. on Sunday.

Robertson was last seen wearing a black sweatshirt and a baseball cap. He is known to frequent the communities of Chula Vista, College Grove and Chollas View.

As soon as Robertson was discovered missing, Facility Eight and George Bailey were placed on lockdown as another head count and a search of all cells was conducted.  Deputies from the Imperial Beach Sheriff’s Substation, Sheriff’s ASTREA (helicopter), Sheriff’s K-9 Unit, Border Patrol Agents and their helicopter searched from the air and the ground overnight. A checkpoint was also set up to search cars driving out of the area.  The San Diego County Fugitive Task Force (FTF) was also mobilized to search areas Robertson has frequented in the past, but have not located him.

He was arrested in May of this year for violating the conditions of his parole.

If you see Robertson, do not approach him. Call 9-1-1. If you have information on Robertson’s whereabouts, you are urged to call Crime Stoppers at (888) 580-8477.  You can remain anonymous and be eligible for up to a $1,000 reward for information that leads to an arrest.