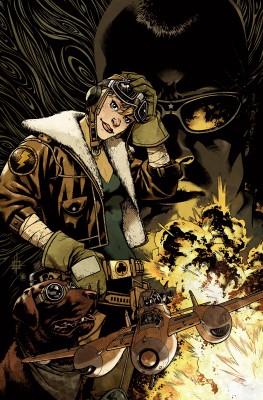 When land and sea have become deadly and uninhabitable, the intrepid survivors of ecological disaster must take to the skies; to the Wild Blue Yonder.

“I couldn’t be happier to continue my long partnership with Zach Howard,” said Chris Ryall, IDW’s Chief Creative Officer. “He illustrated the first comic I ever wrote, and has been producing some stunning work for IDW ever since. Add to that Mike Raicht’s clever scripting and the amazing colors of Nelson Daniel and Wild Blue Yonder  becomes much more than just an innovative concept.”

In a wildly imaginative take on the post-apocalyptic thriller, Raicht, Howard and Harrison have created an eye-popping world of flying machines, massive, makeshift fortresses and a desperate war among the dwindling population left to the scarce resources on land. As mankind has become accustomed to the reality of a prosperous life only existing in sky bound territory, a desperate war has broken out for control and survival on the ground and high above it.

“We’ve been striving to put Wild Blue Yonder together for a long time,” said Raicht. “It is so amazing that it is finally coming together. To be able to publish it at IDW, the same place that has produced some of my favorite creator owned properties, like 30 Days of Night, The Cape, and Locke and Key, is cooler than I can ever truly express.”

“I honestly couldn’t be happier. It’s very gratifying to be drawing my own books full-time while publishing them through my favorite company. Good times!” added Howard.

Clashing factions fight tooth and nail with primitive weapons in a thrilling, high-stakes world of tightly-knit families and deeply realized characters, all cobbling together a life in a world beyond imagination.

“We’re excited for people to see the story unfold in the series,” said Harrison. “Everyone at IDW has been great and supportive.  We’re thrilled to be working with such a great company.”