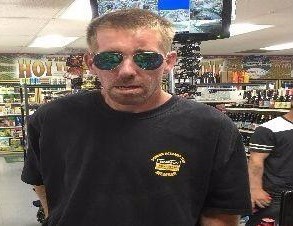 Surveillance video of one of the suspects.

ENCINITAS–Crime Stoppers and investigators from the North Coastal Sheriff’s Station are asking for the public’s help to locate two unknown suspects wanted in connection with a burglary and identity theft that occurred in Encinitas.

On November 10 at about 8 a.m. an unknown suspect broke into a vehicle that was parked at 2240 Encinitas Boulevard in Encinitas. The first suspect took the victim’s purse which contained two wallets, a California driver license, several debit/credit cards, and $290 in cash. The suspect was seen driving a white Hyundai Sonata.

The second suspect is described as a 35 to 40-year-old white male. He stands about five feet, ten inches tall and weighs approximately 180 pounds. He has blond hair and was unshaven at the time of this incident. He was last seen wearing a black t-shirt and sunglasses.

If you recognize the suspect, or have information about this crime, call the North Coastal Sheriff’s Station at (760) 966-3500 or the Crime Stoppers anonymous tip line at (888) 580-8477. Crime Stoppers is offering up to a $1,000 reward to anyone with information that leads to an arrest in this case. Anonymous email and text messages can be sent in at www.sdcrimestoppers.org .