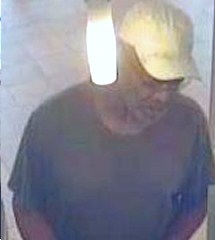 On Tuesday, at approximately 10:15 a.m., an unknown male robbed the Wells Fargo Bank branch located at 610 First Avenue. According to witnesses, the robber entered the bank and provided a demand note stating he was armed with a gun. No weapon was displayed. The teller complied and provided a known amount of money to the robber. The robber then fled on foot. The robber is described as having no teeth, except for one in the middle that was brown and rotted.

The suspect was described as between 50 to 60 years of age, thin build, approximately 6 foot tall, 180 pounds, gray hair on sides of head with gray stubble and without a full beard. He was last seen wearing a light colored baseball hat, glasses, dark-colored T-shirt, and dark-colored pants.