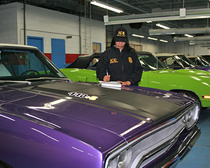 NEW YORK — A major transnational Internet gambling operation based out of Staten Island, N.Y., and Costa Rica has been dismantled by New York City authorities with assistance from U.S. Immigration and Customs Enforcement’s (ICE) Homeland Security Investigations (HSI) agents as part of the El Dorado Task Force. The New York Police Department (NYPD) was the lead investigating agency, which also included the U.S. Attorney’s Office for the Eastern District of New York, and the New Jersey Attorney General’s Office. The case is being prosecuted by the Staten Island District Attorney’s Office.

Other locations were used as wire rooms to manage cash debts and winnings and to assure bets were placed accurately. When the defendants became suspicious of a law enforcement investigation, the organization moved the operation to Costa Rica, setting up the websites “Jerry’s Worldwide Sports Book” and “Momo Sports Book.” Bettors then placed their bets online.

These alleged bookies allegedly laundered up to a $100,000 a week in cash profits via FedEx to Florida or Arizona, which were then couriered to Costa Rica. The money was also stashed in sa

fe deposit boxes, or used to purchase expensive classic cars, and homes, as well as a rental property in Costa Rica.

“Today’s arrests deliver a significant blow to a sophisticated criminal enterprise, which was funded by proceeds gained through illicit activity,” said ICE Director John Morton. “The results of this take down are the product of each law enforcement agency’s unique expertise and extraordinary cooperation during the course of the investigation. While pleased with this success, we are even more determined to work together to disrupt and dismantle other illegal operations that commit crimes against our nation’s financial system.”

“The members of this ring sent millions of dollars of gambling proceeds through a makeshift video rental store on Staten Island that processed more sports bets than movie rentals,” said Raymond W. Kelly, police commissioner for the City of New York. “They thought that no one would notice, but someone did, and as a result of the investigation by detectives from the NYPD’s Vice Enforcement Division, the Staten Island DA’s Office and Immigration and Customs Enforcement agents, the sports betting operation, and the so-called video store, are no longer open for business.”

“The operation we just took down could be the poster child for everything that is harmful about illegal gambling,” said Daniel M. Donovan, district attorney for Richmond County. “It had a devastating effect on our communities, burying people under insurmountable debt – debt that destroyed families and, in some cases, businesses; it drove some to sell drugs and commit other crimes to support their vices; and it victimized honest taxpayers by cheating the government out of millions of dollars in taxable revenue. Simply put: ‘Bet Jerrys’ was a bad bet for all of us.”

In all, ICE HSI agents and NYPD Organized Crime detectives seized up to $5.7 million in assets used to facilitate or purchase, with the profits of the criminal enterprise, 14 valuable classic cars, three homes, commercial property and more than $50,000 in cash.