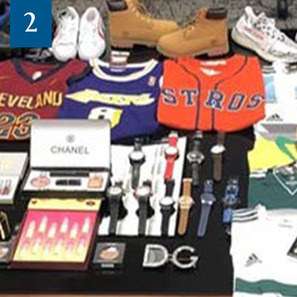 HSI estimates the street value of the seized items at more than $42.9 million, which is HSI’s largest counterfeit seizure in Laredo.

This HSI-led investigation is being assisted by U.S. Customs and Border Protection’s (CBP) Office of Field Operations, Mexican Customs and representatives from the trademark industry.

“Criminal elements use every and any opportunity to sell substandard and counterfeit goods to the American public,” said Acting Deputy Special Agent in Charge Jesus Adrian Flores, HSI Laredo. “HSI special agents are committed to collaborating with industry representatives and law-enforcement agencies to crackdown on counterfeiting that significantly hurts local economies and funnels money into criminal organizations involved in additional illicit activities.”

To date, no criminal charges have been filed in this case. This investigation remains ongoing.

According to HSI, the trademark-infringed merchandise seized was shipped in large boxes from China to an international cargo terminal located in Laredo, Texas. The boxes were manifested to fictitious Laredo recipients and addresses.

Smugglers who typically transport illicit goods into Mexico often fail to file required export documents through CBP’s Automated Commercial Environment; they exploit the ports of entry by clandestinely smuggling merchandise to Mexico. Once in Mexico, the smugglers bribe Mexican cartels who often extort Mexican regulatory and law enforcement officials so that the merchandise passes without being inspected or paying import duties.