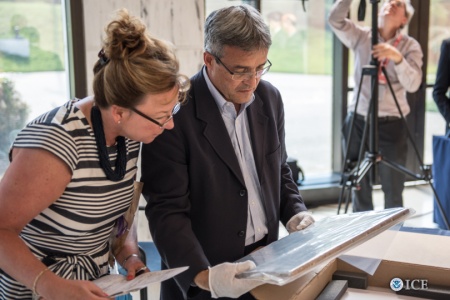 WASHINGTON–Fourteen years after its reported theft from a Paris museum, a Pablo Picasso painting will be returned to France. The repatriation of “La Coiffeusse” follows an investigation led by U.S. Immigration and Customs Enforcement’s (ICE) Homeland Security Investigations (HSI) as a part of Operation Toile.

ICE Director Sarah Saldaña presided over the official transfer of the painting at a ceremony held at the French Embassy in Washington Aug 13.

“The recovery and return of stolen artwork and other cultural artifacts remains a significant priority for ICE,” said ICE Director Saldaña. “As our world continues to shrink, protecting cultural treasures has become even more important and we are committed to doing everything we can to return them to their rightful owners.”

Pursuant to an investigative lead, HSI and U.S. Customs and Border Protection officials conducted an inspection of a targeted shipment in December 2014 in Newark, New Jersey. Upon inspection, the painting was revealed and seized as the shipment contained, in addition to the stolen painting itself, fraudulent statements regarding the shipment’s value, country of origin and description.  The shipping label described its contents as a low-value handicraft valued at 30 euros.

In reality, the cargo contained a $15 million painting by Picasso, which has been listed on the Interpol Stolen Works of Art database since it was reported stolen in 2001.

“Picasso used to say ‘A painting truly exists in the eyes of the beholder,’” remarked Frédéric Doré, Deputy Chief of Mission at the French Embassy. “Returning to the Musée National Museum of Modern Art in Paris, France, [La Coiffeuse] will come back to life and be seen again by the public thanks to this outstanding Franco-American customs cooperation.”

“La Coiffeusse” or “The Hairdresser” was painted by Picasso in 1911 in oil on canvas and is an example of cubism. The painting was last displayed in 1998 in Munich and then returned to Paris’  National Museum of Modern Art. It was reported stolen by the museum in 2001 when museum officials received a loan request and could not locate the painting in their archives.

“We are committed to extracting stolen cultural property from the grasp of the black market and restoring to its rightful owners,” said Acting United States Attorney Kelly Currie.  “Using the civil forfeiture process, we were able to acquire legal title to ‘La Coiffeuse’ and return it to the people of France.  We look forward to seeing this important artwork fully restored and displayed where the public can once again enjoy it.”

The painting was authenticated on Jan. 30 by two experts from the Paris museum: Brigitte Leal, deputy director of collections and a former curator of the Musée Picasso in Paris, and Véronique Sorano-Stedman, head conservator.

HSI plays a leading role in criminal investigations that involve the illicit importation and distribution of cultural property, as well as the illegal trafficking of artwork, specializing in recovering works that have been reported lost or stolen. HSI’s International Operations, through its 63 attaché offices in 46 countries, works closely with foreign governments to conduct joint investigations, when possible.

HSI’s specially trained investigators, assigned to both domestic and international offices, partner with governments, agencies and experts to protect cultural antiquities. They also train investigators from other nations and agencies to investigate crimes involving stolen property and art, and how to best enforce the law to recover these items when they emerge in the marketplace. Those involved in the illicit trafficking of cultural property, art and antiquities can face prison terms of up to 20 years, fines and possible restitution to purchasers of the items.