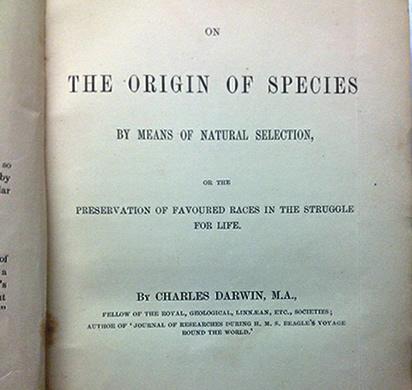 NEW YORK–A book written by scientist Charles Darwin on the process of natural selection is back with its rightful owner, the people of Canada.

At a ceremony today at the Canadian Consulate in New York, U.S. Immigration Customs and Enforcement’s (ICE) Homeland Security Investigations (HSI) returned the book to the Royal Canadian Mounted Police (RCMP) based in Nova Scotia.

The book titled “On the Origin of Species by Means of Natural Selection or the Preservation of Favored Races in the Struggle for Life,”  returned today was stolen from Mount Saint Vincent University Library in Bedford, Nova Scotia, Canada, by convicted antiquities smuggler John Mark Tillman, 51, of Fall River, Nova Scotia.

“The recovery of this Charles Darwin book is a testament to the collaboration between HSI and our foreign law enforcement partners who devote countless resources to protect the cultural property of all nations,” said Glenn Sorge, acting special agent in charge of HSI New York. “With the recovery of this Darwin book, our aim is greater than simply seizing, forfeiting and repatriating cultural artifacts. Our long-term goal is to reduce the incentive for further thefts and smuggling of cultural property.”

“The return of the Darwin book is the final piece of the puzzle in what has been a lengthy investigation into the thefts from almost every intellectual property in Atlantic Canada.  Museums, libraries, archives, private collections and antique dealers had fallen victim to over three decades of pilfering of their holdings by John Mark Tillman,” said Constable Darryl Morgan, lead RCMP investigator on the Tillman file. “The RCMP in Nova Scotia is pleased we have been able to reunite Tillman’s victims with their lost treasures. Soon Charles Darwin’s ‘Origins of Species’ will be returned to its rightful place in Mount Saint Vincent University’s MacDonald Collection.”

Tillman stole the first edition copy of “On the Origin of Species,” as well as two other  Charles Darwin books, “Darwinism: An Exposition of the Theory of Natural Selection,” and “The Effects of Cross and Self Fertilization in the Vegetable Kingdom,” from behind a locked glass cabinet at the Mount Saint Vincent University library sometime in 2012. Tillman sold the “On the Origin of Species,” to a Canadian collector who then sold the book at a Sotheby’s New York auction on June 15, 2012 for $42,500.

On Jan. 18, 2013, the RCMP arrested Tillman at his home in Nova Scotia. On Sept. 25, 2013, Tillman entered guilty pleas for more than 80 charges.  A judge at the Supreme Court of Nova Scotia sentenced Tillman to nine years in prison.

On Feb. 6, 2014, HSI New York received the stolen Charles Darwin book, “On the Origin of Species by Means of Natural Selection or the Preservation of Favored Races in the Struggle for Life,” from Sotheby’s New York.

HSI plays a leading role in criminal investigations that involve the illegal importation and distribution of cultural property, including the illicit trafficking of cultural property, especially objects that have been reported lost or stolen. The HSI Office of International Operations, through its 75 attaché offices in 48 countries, works closely with foreign governments to conduct joint investigations, when possible.

HSI’s specially trained investigators assigned to both domestic and international offices, partner with governments, agencies and experts to protect cultural antiquities. They also provide cultural property investigative training to law enforcement partners for crimes involving stolen property and art, and how to best enforce the law to recover these items when they emerge in the marketplace.

Since 2007, HSI has repatriated more than 7,150 artifacts have been returned to more than 27 countries including paintings from France, Germany and Austria, 15th to 18th century manuscript from Italy and Peru, as well as cultural artifacts from China, Cambodia and Iraq.