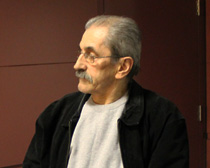 LAS VEGAS– A former Bosnian-Serb police commander wanted in his native country for genocide and atrocities against thousands of Bosnian Muslims was deported May 24, capping a successful effort by U.S. Immigration and Customs Enforcement (ICE) to investigate the case and gain his removal from the United States.

The former Las Vegas resident faces criminal charges in Bosnia and Herzegovina for his role in the Srebrenica genocide. The atrocities took place over several days in July 1995 as Bosnian Serb forces overran a contingent of United Nations peacekeepers, driving tens of thousands of Bosnian-Muslim civilians from the Srebrenica “safe area” and executing more than 7,000 Bosnian-Muslim men and boys. Authorities allege Radojkovic used his position as a commander in the Special Police Brigade to aid in carrying out the crimes. Specifically, prosecutors charge that Radojkovic and his platoon rounded up some 200 Bosnian-Muslim men in the Konjevic Polje region and transferred them to locations where they were executed.

“For the families who lost loved ones at Srebrenica, justice has been a long time coming, but they can take consolation in the fact that those responsible for this tragedy are now being held accountable for their crimes,” said ICE Director John Morton. “I applaud the outstanding work by ICE attorneys, Homeland Security Investigations (HSI) special agents, and ERO officers in bringing a successful conclusion to this case. We will continue to work tirelessly to ensure our country does not serve as a haven for human rights violators and others who have committed heinous acts.”

Radojkovic, a native of Bosnia and Herzegovina, entered the United States in 1999. After a joint investigation by HSI and Bosnian authorities linked Radojkovic to possible war crimes, he was arrested by HSI special agents at his Las Vegas residence in January 2009. Ten months later, an immigration judge ordered Radojkovic deported on multiple grounds, including a finding that he “ordered…and/or otherwise participated in extrajudicial killing.” Radojkovic’s removal order was upheld upon appeal.

In seeking to establish Radojkovic’s role in the Srebrenica genocide, ICE worked closely with the Office of the Prosecutor of the International Criminal Tribunal for the former Yugoslavia (in The Hague) and the Prosecutor’s Office of Bosnia-Herzegovina in Sarajevo. This week’s removal is the culmination of a long-term effort by multiple domestic and overseas divisions of ICE, including HSI, ERO, the Office of the Principal Legal Advisor, the Office of International Affairs and the Human Rights Violators and War Crimes Center in Washington, D.C. ICE also received assistance with the case from the U.S. Department of State.

Radojkovic is the second former special police commander linked to the massacre to be targeted by ICE for enforcement action. Nedjo Ikonic, formerly of Milwaukee, Wis., was deported Jan. 19, 2010, to face genocide-related charges in Bosnia and Herzegovina.