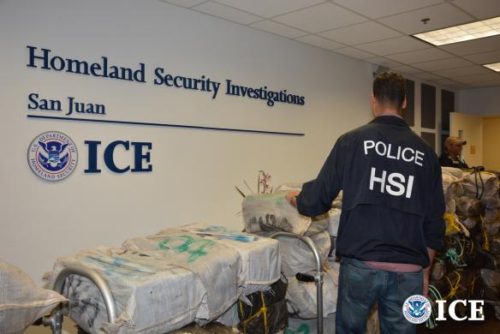 On Oct. 13, a federal grand jury in the District of Puerto Rico returned an indictment against six defendants charged with conspiracy to import controlled substances from the Dominican Republic into Puerto Rico. The indictment, unsealed Tuesday, alleges that from about January 2013 through May 2013, Erick Mosquea-Polanco, Juan Jose De La Cruz-Morales, Kevin De Morla-Santana, Rudy Contreras-Severino, Jose Morales-Soto and Sandy Hernandez-Mieses conspired to intentionally and knowingly import and attempt to import from the Dominican Republic into the United States more than five kilograms of cocaine. The indictment also alleges that the defendants knowingly and unlawfully conspired to launder more than $1 million in illegal proceeds from drug trafficking.

“The indictment and arrest of these individuals sends a clear message to those involved in drug trafficking and money laundering that HSI will go after them to bring them to justice and will seize the assets produced from their illicit activity,” said Ricardo Mayoral, special agent in charge of HSI Puerto Rico

During the arrest of Sandy Hernandez Monday, HSI special agents found more than $30,000 in cash, three weapons and approximately 1,786 kilograms of cocaine. Of the six persons in the indictment, three were arrested while the others are awaiting extradition from the Dominican Republic.

HSI agents enforce a wide range of criminal statutes including Title 18 and Title 19 of the U.S. Code. These statutes address general smuggling issues as well as customs violations. ICE also enforces Title 21, which covers the importation, distribution, manufacture and possession of illegal narcotics.

HSI agents have extensive knowledge of the border environment and techniques employed by smuggling organizations to transport contraband into the United States. This expertise has been gained through years of experience in conducting undercover operations, utilizing confidential informants, special enforcement operations and conducting contraband smuggling investigations.

The methods used by smuggling organizations are always changing and through continued training, the use of emerging technologies and dedication, ICE has maintained its expertise in disrupting and dismantling these criminal organizations.

If convicted the defendants face a minimum sentence of 10 years up to life in prison.