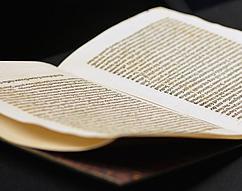 Washington, D.C.–U.S. Immigration and Customs Enforcement (ICE) and the Department of Justice (DOJ) on June 6 returned a more than 500-year-old copy of Christopher Columbus’ letter describing his discoveries in the Americas to Spain during an evening repatriation ceremony at the Residence of the Spanish Ambassador to the United States.

The letter, originally written in 1493, was stolen from the National Library of Catalonia in Barcelona and sold for approximately $1 million.

“I am pleased to be able to return a priceless piece of cultural property to its rightful owners,” said HSI Acting Deputy Executive Associate Director Alysa D. Erichs. “I would like to thank Ambassador Morenés for his hospitality in hosting us tonight, HSI Wilmington, Madrid, Brasilia, and Paris for their excellent work on this investigation, as well as the tremendous assistance by our partners at the U.S. Attorney’s Office in the District of Delaware, without whom today’s repatriation would not be possible,” Erichs added.

The return of the letter was the culmination of a seven-year investigation jointly conducted by ICE’s Homeland Security Investigations (HSI) and the U.S. Attorney’s Office in Delaware. It began in 2011 when HSI Wilmington (Del.) and the Delaware U.S. Attorney’s Office received a tip that several 15th century original manually printed copies of the Columbus Letter were stolen from European libraries and replaced with forgeries without the knowledge of library officials or local law enforcement. The investigation determined that the stolen Columbus Letter from Spain was sold in November of 2005 for 600,000 Euros by two Italian book dealers.

“This evening ceremony is a showcase of the ties that bind the United States and Spain together,” said Ambassador of Spain to the United States Pedro Morenés. “The cooperation between Homeland Security Investigations and special units of the Guardia Civil has born great fruit in ensuring the return of stolen cultural property to Spain,” Ambassador Morenes added.

In June 2012, a subject matter expert, accompanied by an HSI Wilmington Special Agent, visited the National Library of Catalonia in Barcelona and reviewed the Columbus Letter in the possession of the library at which time it was determined, in coordination with Spanish authorities and with support from HSI Madrid that the letter at the library was a forgery.

In March 2013, it was discovered that the Columbus Letter believed to have been stolen from Barcelona was reportedly sold for 900,000 euros in June 2011. Following extensive negotiations with the U.S. Attorney’s Office for the District of Delaware, the individual in possession of the letter volunteered to transfer custody to HSI Special Agents, which was then brought to Wilmington, Delaware in February 2014 for further examination. In March 2014, a subject matter expert evaluated the letter and determined that the document was “beyond all doubt” the original stolen from the National Library of Catalonia. Additionally, other experts conducted a series of non-invasive digital imaging tests, which determined, among other things, the probable use of a chemical agent to bleach the ink of National Library of Catalonia’s stamp and that the paper fibers of the Catalonia Plannck II Columbus Letter had been disturbed from their original state where the stamps were previously located.

U.S. Attorney David C. Weiss stated, “The recovery of this Plannck II Columbus Letter on behalf of the Spanish government exemplifies not only the significance of federal agency partnerships in these complicated investigations, but the close coordination that exists between American and foreign law enforcement agencies.  We are truly honored to return this historically important document back to Spain – its rightful owner.  I commend the dogged efforts of HSI special agents and Department of Justice attorneys who are dedicated to the recovery of stolen cultural artifacts from around the world.”

The repatriation marks the second return of a Columbus letter by ICE, the most recent until now taking place in May 2016.