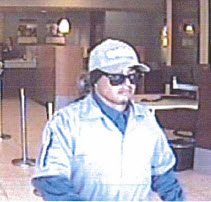 SAN DIEGO–Detectives are asking the public to help identify and locate an unknown suspect wanted in connection with a “I Have a Bomb Bandit” bank robbery series in San Diego.

Detectives believe the male suspect was involved in the robberies of California Coast Credit Union,

In all three cases, the suspect used a demand note asking for money and used the threat of a bomb. No bomb has been seen and nobody has been injured. The suspect was last seen getting into the passenger side of a vehicle and leaving the scene.

The suspect is described as possibly a Hispanic, Asian, or Indian adult male. 30 to 40 years old, 5 feet, four inches to five feet, nine inches tall with a thick build and black hair worn in a ponytail.

The suspect’s vehicle is described as a red small 2-door sedan, possibly a Toyota or Honda.

Anyone with information on the identity or location of the suspect is asked to call the San Diego Police Robbery Unit at (619) 531-2299, or the Crime Stoppers anonymous tip line at (888) 580-8477. Crime Stoppers is offering up to a $1,000 reward to anyone with information that leads to an arrest in this case. Anonymous email and text messages can be sent in through www.sdcrimestoppers.com.