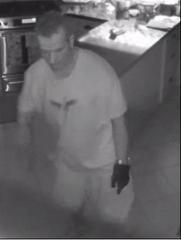 Surveillance video of hot prowler inside a residence.

ESCONDIDO–Investigators arrested a man in connection with a series of forced entry break-ins at several residences in North County.

Crowder is in custody at the Vista Detention Facility with a $500,000 bail. His first court appearance will be on October 28.

On October 16, at about 5:15 a.m., an unknown suspect forced entry through a rear sliding glass door of a residence located in the 2400 block of Links Way in Vista. The residents were asleep in an upstairs bedroom at the time of the burglary. After ransacking in the residence for almost 45 minutes, the suspect was eventually confronted by the residents in the kitchen area after they heard someone rummaging through the house.