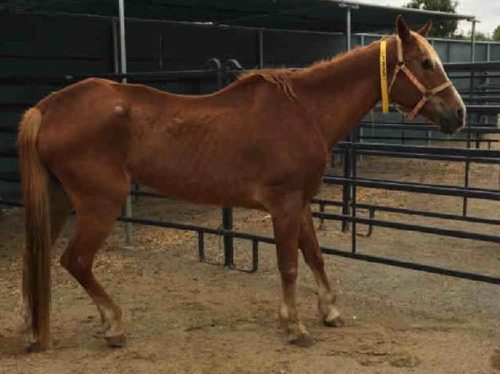 One of the horses at the time it was seized. Thirteen are now healthy enough to be adopted.

The County Department of Animal Services removed three horses in the most danger from the property on May 29. Twelve more were taken in June 2, immediately following an administrative hearing. In addition to being underweight, many of the horses had severe hoof issues.

Two of the horses were so severely malnourished and had such extensive medical issues that they were euthanized to alleviate their suffering. The remaining thirteen horses have been under veterinary care and are now healthy enough to be adopted.

“All of these horses suffered from neglect and our staff has dedicated a lot of time, energy and hay to help the animals put on weight,” said Dawn Danielson, Director of Animal Services.

Some of the horses still have hoof issues but given time and proper care, those conditions should resolve themselves.