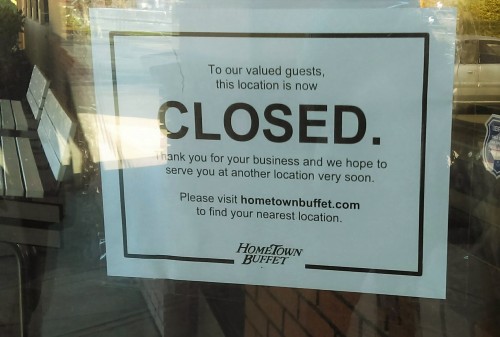 The Hometown Buffet in Oceanside is one of several locations permanently closed.

The news came as a shock to Hometown Buffet customers and employees who were notified of the permanent closings from a sign posted on the restaurant’s front door.

According to a now-former general manager at one of the locations, the news came as a surprise to him and his 40 employees. The manager, who withheld his identity, was at the restaurant on Thursday to allow work crews and vendors to remove furnishings and other equipment from the restaurant.

“Since that time, we have continued to execute former management’s operating plan to stabilize and enhance the performance of the company. However, based on ongoing assessments of individual restaurants, it is necessary to shutter locations for the continued viability of the brands and our employees,” said Peter Donbavand, Vice President of Business Development, in written statement.

Donbavand says the decision to close some restaurants is not easy. He added that the company strongly believe that the direction is best for the long-term health of all brands.

“While we cannot predict future market conditions, the plan is to continue operating the remaining Ovation Brands’ restaurants as they are financially viable,” Donbavand says. “Although the overall number of employees affected by closures is large, employees of closed restaurants will be given the opportunity to apply for positions at operating stores, and we expect many to take advantage of that opportunity.”

The company will add staff to the remaining operating restaurants.