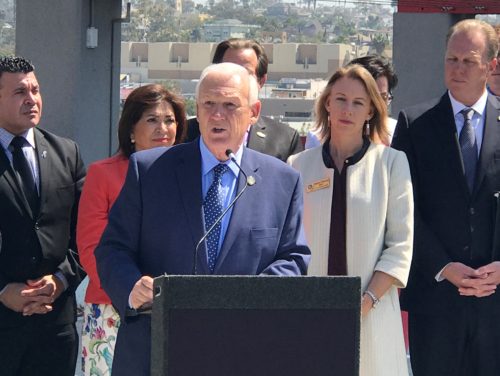 SAN DIEGO–The annual count of San Diego County’s homeless population found that there were 9,116 people living on the streets or in shelters, a 5 percent increase from last year.

The WeAllCount Campaign, also known as the Point-in-Time Count, was held in the early morning hours on Friday, January 27, 2017. This annual effort helps determine the number and location of homeless individuals in the San Diego region and is critical in securing about $18 million in federal funding for needed housing and services.

The Regional Task Force on the Homeless is charged with completing this important annual count.

“Having these numbers to work with puts in black and white what many of us have been sensing: Homelessness is on the rise,” said San Diego County Supervisor Ron Roberts, who chairs the Regional Task Force on the Homeless. “Yet while the overall increase is disappointing, trends around the region, and with certain groups such as veterans, are encouraging. We also are transitioning our homeless programs from temporary shelters to permanent housing, which takes longer to create in the quantities that make a difference. I find many challenges with the results, along with much to be encouraged about in the months and years ahead.”

This year, the Regional Task Force on the Homeless was merged with the San Diego Regional Continuum of Care, creating a combined organization charged with engaging stakeholders to drive solutions for ending homelessness. Along with Supervisor Roberts being elected to the chair’s seat, San Diego Councilmember Chris Ward was elected vice-chair.

“These numbers provide us an important snapshot of the region in January, and confirm what many of us have seen in our communities for the 12 months prior – we’re facing a crisis that demands an immediate, comprehensive response,” said San Diego City Councilmember Chris Ward, Vice Chair of the Regional Task Force on the Homeless. “I’m encouraged by the investment from leaders from across the region to get new strategies and projects moving and make sure the Regional Task Force is an effective group to accelerate the lasting solutions we need.”

The Point-in-Time Count found that the number of unsheltered homeless individuals in San Diego County was 5,621, up from 4,940 in 2016, while the number of homeless persons in shelters was 3,495, down from 3,752 a year earlier. There was an increase of 58 percent region-wide in tents and hand built structures.

San Diego saw a decrease of 9 percent in all veteran homelessness, a 21 percent decrease in unsheltered homeless veterans from a year earlier. Dolores Diaz, executive director of the Regional Task Force the Homeless that coordinates the WeAllCount event, said it was a record-breaking year in terms community engagement with 1,788 volunteers working out of 68 count and survey sites throughout San Diego County to help count and survey homeless individuals.

“The record breaking amount of volunteers that came out to count is evidence that San Diego deeply cares about its homeless neighbors and finding a solution,” said Diaz.

The next Point-in Time count is scheduled for Friday, January 26, 2018.  It is anticipated that hundreds of volunteers will once again canvas the County to count and survey the homeless.