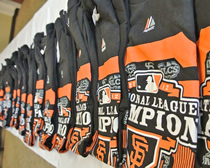 During enforcement actions last week that coincided with the initial two World Series games, HSI special agents seized nearly 1,200 items of counterfeit MLB clothing being offered for sale by vendors in and around AT&T Park. The merchandise included more than 1,000 phony t-shirts, along with counterfeit baseball hats and knit caps, more about which you will find on the page. Had the goods been genuine, they would have retailed domestically for more than $32,000.

“Preying on Bay Area baseball fans at a time when their pride and emotions are at their peak is a serious injustice in itself,” said Clark Settles, special agent in charge for HSI San Francisco. “But perhaps even more troubling is that the proceeds from the sale of counterfeit goods, more often than not, are funneled into the coffers of streets gangs and other criminal organizations, which is why HSI takes such an aggressive stance towards these illegal activities.”