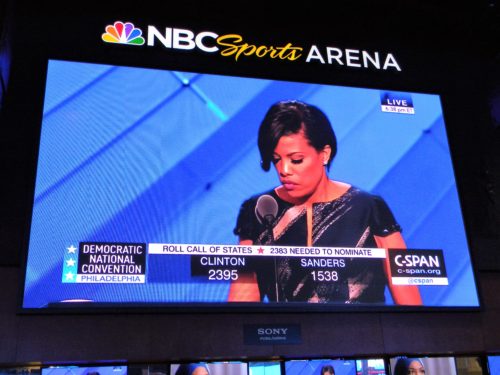 PHILADELPHIA – Hillary Clinton made history Tuesday night as the first female major party nominee in the country’s history — after her rival, Bernie Sanders, threw his support behind her and nixed the roll call vote.

The moment was marked with cheers, tears and anger from some Sanders supporters who were dissatisfied with the primary contest — including the votes controversially given to hundreds of super delegates — and its outcome.

More than 1,800 delegates — short of the 2,382 needed to clinch the nomination — cast their votes for Sanders, who surprised observers with strong showings early on and built a movement of supporters with his grass-roots campaign, built on small donations and railing against Wall Street. 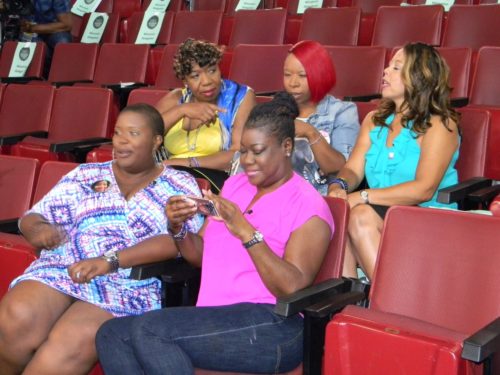 Mothers of children who were slain by police officers were prominently featured at the convention. Photo: Danny R. Johnson/San Diego County News

Delegates and supporters of Sanders jeered at several speakers, including perceived progressive allies like Sen. Elizabeth Warren and even Sanders himself for voicing their support for Clinton. Outside the convention yesterday, protesters voiced anger with the Democratic National Committee and Clinton over a number of issues, including the environment, legalized drugs and the Trans-Pacific Partnership. Some observers viewed Tuesday’s roll call as the final opportunity for Sanders supporters to voice their displeasure with Clinton. Both Clinton and Sanders were up for the nomination at the convention — largely considered a symbolic gesture for Sanders supporters.

“You call this a democracy,” angrily stated Hodgins. “When you have emails that shows Wasserman Shultz played favoritism to Clinton and denied Bernie resources and money – that’s called hijacking the process and that’s not fair,” concluded Hodgins. 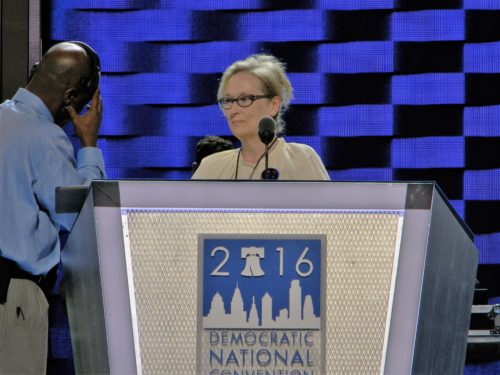 Earlier in the evening, Meryl Streep gave an enthusiastic speech at the Democratic National Convention on Tuesday night. But before the 67-year-old Oscar winner’s inspiration speech there was one moment that had the whole Internet talking. As she approached the podium, Streep took a moment to absorb the applause coming in from the excited crowd at the Philadelphia’s Wells Fargo Center. And then she let out a cheer of her own, shaking her fists in the air in praise of the nation’s first female presidential candidate.

Madeline Albright, the former secretary of state joined a slew of other famous Hillary Clinton supporters in Philadelphia Tuesday night to voice her support of the now-confirmed presidential candidate, discuss the off-(Putin)g possibility of a Trump presidency, and, gosh darn it, wear her best brooch yet.

Albright said she was thrilled to see Hillary Clinton make history as the first woman presidential candidate for a major party, but noted that she supports Clinton because she believes she’s best for the job, not because she’s a woman. 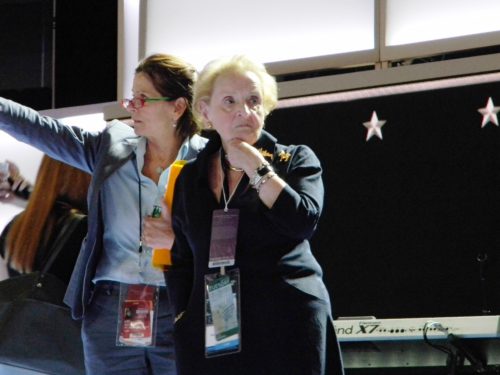 Former Secretary of State Madaline Albright does a practice run on the DNC stage where she gave her full support to Hillary Clinton. Photo: Danny R. Johnson/San Diego County News

“What we need to do is vote for the person who is best for the job, and I think Hillary is. And there are certainly women I would never vote for: one of them you interviewed, Sarah Palin,” Albright said in an interview with Yahoo Global News Anchor Katie Couric at the Democratic National Convention in Philadelphia on Tuesday.

The mothers of Trayvon Martin, Michael Brown, Eric Garner, Sandra Bland and others took the stage together at the Democratic National Convention tonight. All of the women on stage were part of the Mothers of the Movement, speaking out against gun violence and police brutality. After the DNC ran a video about their activism, all of them appeared on stage to massive applause from the crowd, which immediately chanted “Black Lives Matter!” over and over.

Geneva Reed-Veal, Sandra Bland’s mother, opened her remarks by praising God before speaking very emotionally about the “unlawful” traffic stop and arrest of her daughter. She declared, “I am here with Hillary Clinton tonight because she is a leader and a mother who will say our children’s names.”