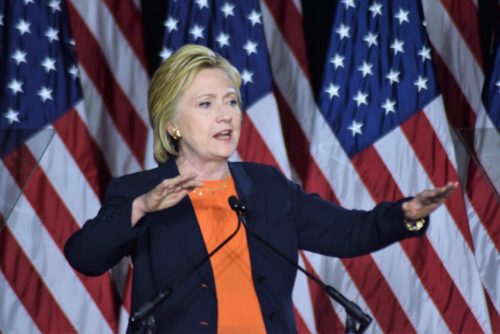 SAN DIEGO–Former Secretary of State Hillary Clinton Thursday delivered a major speech on national security to an invite-only event of 200 of her supporters at The Prado in Balboa Park.

This was the Clinton campaign’s first visit to San Diego before the June 7 California primary.

“Donald Trump’s ideas aren’t just different – they are dangerously incoherent. They’re not even really ideas – just a series of bizarre rants, personal feuds, and outright lies,” Clinton told her supporters. “He is not just unprepared – he is temperamentally unfit to hold an office that requires knowledge, stability and immense responsibility.”

During her blistering 35-minute speech, Clinton called Trump a thin skinned man who would lead America into a war.

“This is not someone who should ever have the nuclear codes – because it’s not hard to imagine Donald Trump leading us into a war just because somebody got under his very thin skin,” she said. “We cannot put the security of our children and grandchildren in Donald Trump’s hands.  We cannot let him roll the dice with America.”

Clinton, who is focusing her attention on the November 8 general election with Trump, says the GOP front runner has alienated U.S. allies and has praised foreign dictators such as Russian President Vladimir Putin.

“He praises dictators like Vladimir Putin and picks fights with our friends – including the British prime minister, the mayor of London, the German chancellor, the president of Mexico and the Pope,” She says.

Putin told ABC News in an interview that Trump was “absolutely the leader in the American presidential race.”

Trump told Reuters that he is willing to meet with North Korean leader Kim Jong Un –to discuss economic and military relations with South Korea and China.

Clinton outlined her five-point plan to defeat terrorist groups such as ISIS, strengthen the U.S. economy, and to maintain strong relations with U.S. allies.

“First, we need to be strong at home,” she said. “That means investing in our infrastructure, education and innovation – the fundamentals of a strong economy. We need to reduce income inequality, because our country can’t lead effectively when so many are struggling to provide the basics for their families.”

The second part of the Democratic front-runner’s plan is for the U.S. to stick with its allies.

“Allies provide staging areas for our military, so we can respond quickly to events on the other side of the world. And they share intelligence that helps us identify and defuse potential threats,” she said.

In the third part, Clinton says “we need to embrace all the tools of American power, especially diplomacy and development, to be on the frontlines solving problems before they threaten us at home.”

Fourth, we need to be firm but wise with our rivals. Countries like Russia and China often work against us. Beijing dumps cheap steel in our markets. That hurts American workers. Moscow has taken aggressive military action in Ukraine, right on NATO’s doorstep,” she said.

Clinton’s final plan would confront terrorists domestically and internationally. She says incidents like the one in San Bernardino six months ago are “real and urgent.”

“We need to take out their strongholds in Iraq and Syria by intensifying the air campaign and stepping up our support for Arab and Kurdish forces on the ground. We need to keep pursuing diplomacy to end Syria’s civil war and close Iraq’s sectarian divide, because those conflicts are keeping ISIS alive,” she said.

Clinton says electing Donald Trump commander-in-chief would be a “historic mistake.” She added, “It would undo so much of the work that Republicans and Democrats alike have done over many decades to make America stronger and more secure. It would set back our standing in the world more than anything in recent memory.”

The former secretary and her husband, former President Bill Clinton have spent weeks campaigning in California, talking to voters and supporters.