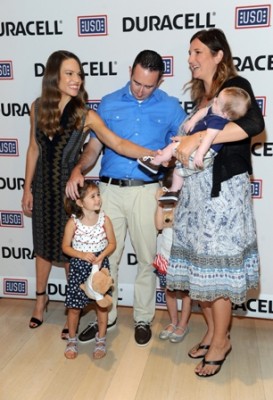 NEW YORK–In honor of Independence Day, Duracell launched a new film to shine a light on the children of military families and announced a partnership with the United Service Organization (USO).

The film, inspired by the Nilson family of San Diego, tells the story of a young girl and her beloved battery-powered recordable teddy bear. Her teddy bear isn’t just any teddy bear, it’s her way of staying always connected to her father during his deployment through the comfort of hearing his voice.

Two-time Academy Award-winner, Hilary Swank, shared her support of the program as the daughter of a service member herself; her father is a retired Air Force Chief Master Sergeant. Swank joined Duracell for a screening of the film and a panel discussion alongside United Service Organization (USO) Senior Vice President of Operations, Alan Reyes, and the military family who inspired the film.

Since the war in Afghanistan began in 2001, more than 2 million American children have had a deployed parent, according to the “Military Children and Families” report conducted by Princeton University/Brookings (Fall 2013). Many of them have seen multiple deployments, 3, 4, or even 5 family separations, making the USO’s “Comfort Crew for Military Kids” program important and something Duracell is proud to support.