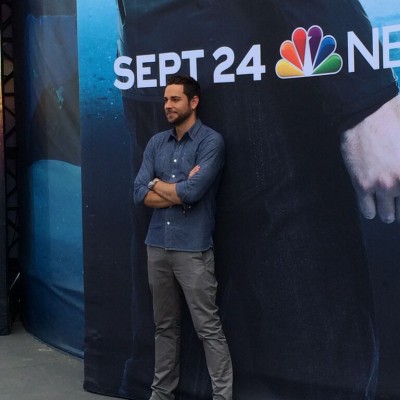 Never before at Comic-Con — or anywhere — have fans been given the multi-sensory experience of interactive visuals and kinetic effects at this level. Over 1,000 fans visited the “Heroes Reborn” experience since it opened on Thursday.

Using the NVIDIA GameWorks special effects library, FlameWorks, V Squared Labs created two side-by-side portals where fans entered into the Renautas Corporation Evolved Human research facility found in the “Heroes Reborn” universe. Each fan was scanned by a Microsoft Kinect to reveal their image on the screen with their special power: pyro-kinesis. Fans were then put through a series of training exercises where they watched flames appear on their hands, move with them, and were able to throw them at targets. Once training was completed, fans then used their pyro-kinetic ability to take down the city’s Evolved Human Database, which crescendos in Cryo blasts and massive floor vibrations.
“The entire experience lasts approximately 2 minutes, but goes by really quickly. Fans have brought their friends back and waited in line to experience it again,” said Alex Theory, Executive Producer for V Squared Labs. “This type of augmented reality, interactive, kinetic experience has never been done before. Anywhere. It’s V Squared Labs’ first time at Comic-Con and we’re loving every minute of it. Especially seeing people’s reaction to our work.”
V Squared Labs collaborated with graphics pioneer NVIDIA to showcase the GameWorks flame-engine technology. NVIDIA FlameWorks is a graphics technology system for generating realistic fire, smoke and explosion effects to create truly rich and immersive experiences.
V Squared Labs has previously created massive visual and interactive experiences at Coachella, EDC, Ultra, American Idol, and many other events and brand activations including the StarCraft 2 World Championship stage at BlizzCon 2014, which featured stunning projection mapping of real-time game play and artwork.
NBC’s “Heroes Reborn” experience will be open to the public from 11 a.m. to 7 p.m. through July 12 at Gaslamp Square.