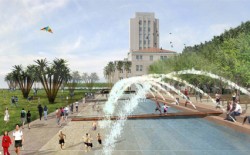 SAN DIEGO–It fell with a clatter, signaling an excavator to start ripping down the building.

The demolition of the 1958 J.B. Askew Building at the County Administration Center (CAC) will make way for an expansive waterfront park. Construction will start in the spring; the park should be open by late 2013.

“A lot of good work’s been done in Askew, but it was intended as temporary office space, and we can look forward to something far better replacing it,” said Board of Supervisors Chairman Bill Horn.

The Askew demolition will be visible from Harbor Drive and Grape Street. Public parking and other business at the CAC won’t be affected during the tear-down, which is expected to finish in December. The building was renamed in 1980 after the County’s second public health officer J.B. Askew, who was a passionate advocate for public health in his 25-year career before he retired in 1975.

The 11-acre waterfront park will surround the historic CAC, which was built with Works Progress Administration funding and dedicated by President Franklin Delano Roosevelt in 1938.

“The County Administration Center has been called the ‘Jewel of the Embarcadero,’ but it’s really going to sparkle when the park, 830-foot fountain and gardens surround it,” said Vice-Chairman Ron Roberts.

An underground parking garage will be built off Ash Street to replace above-ground lots.

The park plans include the expansive fountain and splash feature where kids will frolic and adults will dip their toes; civic greens for picnics, large special events, sports and lounging; and several themed gardens, including a Mediterranean garden and a children’s play garden.

“The Waterfront Park will join with the first phase of the North Embarcadero Visionary Plan and under-construction Ruocco Park to transform our waterfront and further elevate San Diego on the list of world-class cities,” said Supervisor Greg Cox.

The Askew demolition, the park, and the garage are expected to cost about $44 million. Funding will come from the general fund, bond proceeds, and the County Redevelopment Fund.

“The County’s fiscal prudence and consistent AAA credit rating put us in an excellent position to provide this treasure for County residents to enjoy far into the future,” said Supervisor Dianne Jacob.

The project is designed with sustainable elements including low-water irrigation, drought-resistant landscaping, low-energy lighting and permeable ground coverings to reduce storm-water runoff into the bay.

“This is a sustainable, model project that will also be a hub of recreation and culture,” said Supervisor Pam Slater-Price.