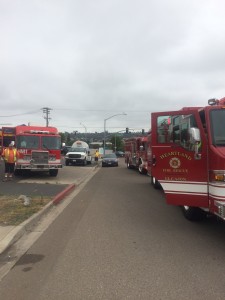 EL CAJON–Heartland Fire and Rescue crews Monday morning were dispatched to a bleach spill in the parking lot of the 500 block of West Bradley Avenue in El Cajon.

Workers from Abcana Industries, a pool manufacturing and supply company, discovered the leak when they arrived to work at 5:30 a.m. Monday morning.

Fire crews arrived on scene and conducted atmospheric readings utilizing gas monitors, which revealed readings to be in the normal range. San Diego City and County Hazardous Materials teams were called out to further investigate. Businesses in the area and the street remained opened, as there were no public health or life safety issues.

Hazardous materials teams determined that a 4000 gallon tank containing bleach leaked approximately 2000 gallons. A secondary containment area was in place to contain any potential runoff from spills or leaks, but that also failed, subsequently leading to the spill to the parking lot and storm drain. A private environmental cleaning company assisted crews with the cleanup.