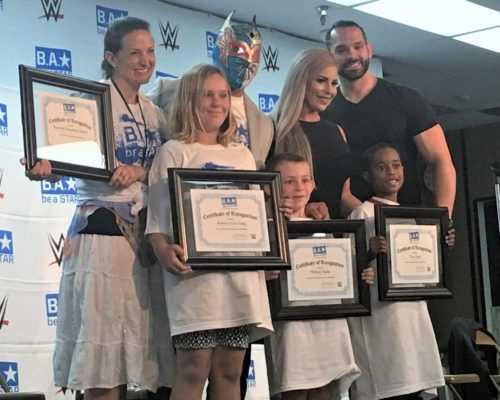 SAN DIEGO–On Tuesday morning the World Wrestling Entertainment organization (WWE), honored the students and staff at Hancock Elementary School for their anti-bullying efforts with a special school-wide assembly featuring their WWE Superstars. Students participated in the “BE a STAR” assembly, a part of the WWE’s bullying prevention initiative founded in 2011.

The WWE recognizes specific schools nationwide for their extraordinary efforts in promoting positive social interaction among peers and encouraging students to show tolerance and treat others with respect.

The recognition of Hancock Elementary is a great example of how the districts programs and continued efforts to end harassment are making great progress in the fight against bullying, according to school officials.

San Diego Unified says it is committed to providing all students and staff with a safe learning environment where everyone is treated with respect. This year, in an effort to strengthen the fight against bullying the district partnered with the Anti-Defamation League and implemented their “No Place for Hate” campaign within all San Diego Unified schools.