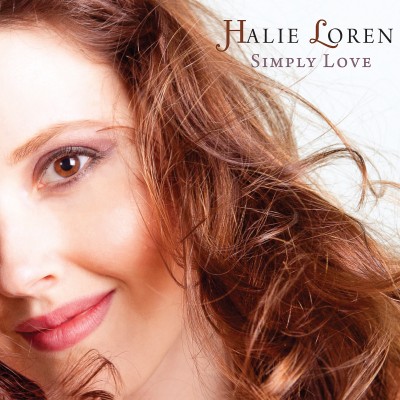 LOS ANGELES – Released to Asia in June 2013 and scheduled for its September 10, 2013 United States debut, the Simply Love CD produced by Justin Time Records jazz and pop music vocalist sensation, Halie Loren, sold more than 3,000 copies in its first week, kicking off a remarkable run of two appearances at No. 1, five weeks in the top 5, and three months (and counting) on the Billboard Japan Top 20 Jazz Albums chart, and spawning five Top 40 jazz singles on iTunes Japan. In July, her fourth tour of Japan in as many years culminated in six sold-out shows at the Cotton Club in Tokyo.

The iconic jazz composer Count Basie once stated that “there are three sexes: women, men, and singers.” Bing Crosby and Frank Sinatra established the primacy of the vocalist in popular music well over half a century ago. In fact, as jazz stylist and vocalist Dee Dee Bridgewater once put it, when the singer is on, there is no way anybody else is getting any attention. Alas, enters the incomparable Halie Loren in a kinky way that seems completely characteristic of her life and music, both supports and challenges this kind of thinking.

Loren’s Simply Love CD takes us down a wonderfully musical journey of classic melodies like For Sentimental Reasons, L-O-V-E, Happy Together, and Moon River, all sung with a passionate and seductive pure voice.

The Simply Love CD is Halie’s fourth release on the Justin Time label and is her most intimate. The 13-tracks CD is a thematic collection of songs designed to get you in the mood for whatever season according to Loren. “With this album I wanted to meet the mood of the season. These are the kinds of songs we want to cozy up with that special someone and enjoy each other’s company,” she explained.

If Halie’s task is to get you and me in the mood — then she successfully achieved her objective with Simply Love. Listen as she serenades us with her smooth vocal chops in For Sentimental Reasons, a song by Abner Silver, Al Sherman and Edward Heyman and was first released on October 18, 1936. It was recorded by the Tommy Dorsey Orchestra featuring a vocal by Jack Leonard. In this tune, Halie makes melodic alterations which are so subtle even the original songwriters would not have objected. Even in L-O-V-E, which is a jazz song written by Bert Kaempfert and Milt Gabler for American singer-pianist Nat King Cole’s 1965 album L-O-V-E (the last album released before Cole’s death on February 15, 1965), Halie Loren sings an interpretation of the melody that Kaempfert and Gabler wrote, however, with some of the notes and rhythms adjusted thanks in large part to Loren’s long time musical confidante and co-producer, Matt Treder.

Joining the central quartet for Simply Love (pianist Matt Treder, bassist Mark Schneider and drummer Brian West) are guitarists William Seiji Marsh on five tracks and Daniel Gallo on one. Another powerful element of this recording is the use of a string quartet on two tracks, (violinists Dave Burham and Lisa McWhorter, cellist Dale Bradley and Clark Spencer on viola), with Burham and Bradley also performing on one other. Treder’s brilliant string arrangements utilize the string quartet in its traditional form on the exquisite Le Premier Bonheur du Jour (sung in French) and subtly orchestral through tasteful overdubbing on the buoyant Bossa Nova, Cuando Bailamos (a Loren original, co-written with the late Larry Wayne Clark). The cello has always had a place on all of Loren’s albums, its deep sonority totally complementary to the richness of her voice. Here, it’s combined with violin to add additional depth and tantalizing tension to the deliciously dramatic tango, I’ve Got to See You Again.

The Simply Love CD is about emotions and intimacy. Emotions are the central element of this album — what it feels like, how it sounds, where it comes from. It is not something abstract that you relate to in Halie’s work. Rather, Simply Love is so real you can feel the emotional impact of each song and literally hold it in your heart.