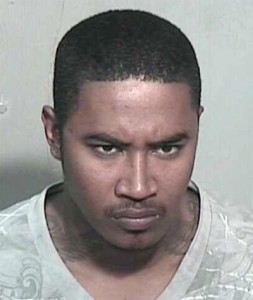 SAN DIEGO–The gunman who was involved in a 5 hour standoff with San Diego police officers Wednesday has been identified.

Titus Nathan Colbert, 33 of Las Vegas surrendered after the standoff and was taken into custody by police officers in his Bankers Hill apartment. Colbert was not injured but was taken to a local hospital as a precautionary measure.

About 9:25 a.m., police officers responded to a radio call of a domestic violence related burglary in the 2400 block of Brant Street. The call came from a woman who possibly thought that her ex-boyfriend was inside her residence, and had “no reason to be inside there,” according to San Diego Police Chief Shelley Zimmerman.

Police officers, including a K9 dog, found a broken sliding glass door on the apartment and conducted a security check inside.

As the officers checked the interior of the residence, the gunman fired several shots at them through a partially closed interior door, narrowly missing them. The officers returned fire and exited the apartment.

Special Weapons and Tactics (SWAT) personnel arrived at the location as the gunman continued to fire multiple rounds out of the windows targeting officers.

As a precaution, Washington Elementary and City Tree Christian schools were placed on lockdown. Police told residents near the standoff to take shelter and avoid standing next to their windows.

Federal Aviation Administration officials briefly suspended flight arrivals at Lindbergh Field due to the standoff. Officials say the active shooter location is near the flight path of arriving aircrafts.

Negotiators arrived and attempted to have Colbert surrender. However, he continued to sporadically fire gunshots.

At about 2:40 p.m., Colbert surrendered and was taken into custody. He will be booked into county jail for attempted murder on police officers, possession of an assault rifle, and other charges.

Police officials say a handgun and an assault rifle were recovered at the scene.