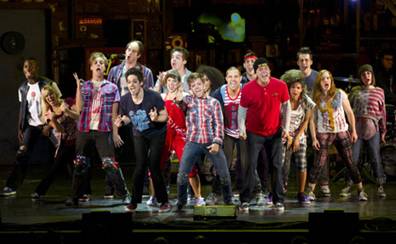 SAN DIEGO–Direct from Broadway, the smash-hit musical “American Idiot” tells the story of three lifelong friends, forced to choose between their dreams and the safety of suburbia. Their quest for true meaning in a post 9/11 world leads them on the most exhilarating theatrical journey of the season, running May 28-June 2.

Casting has been announced for the upcoming national tour of Green Day’s “American Idiot,” the explosive Broadway hit called “wonderfully raucous” and “emotionally charged” by The New York Times and “flat-out electrifying” by the Boston Globe.

Alex Nee will star as Johnny along with Trent Saunders as St. Jimmy, Casey O’Farrell as Will, Thomas Hettrick as Tunny, Alyssa DiPalma as Whatsername, Jenna Rubaii as The Extraordinary Girl and Kennedy Caughell as Heather.

“I am thrilled that we get to continue sharing “American Idiot” with audiences across North America,” said director Michael Mayer. “The creative team and I couldn’t be happier with the stellar group of actors we’ve assembled. All of them are talented new additions to the “American Idiot” family.”

“American Idiot”, a 2010 Tony Award-nominated Best Musical and 2010 Grammy Award winner for Best Musical Show Album, features the music of Green Day with the lyrics of its lead singer Billie Joe Armstrong. The book is by Armstrong and Michael Mayer and direction is by Tony Award-winner Mayer (“Spring Awakening”).

The acclaimed creative team also includes choreography by Olivier Award-winner Steven Hoggett (“Black Watch”), and music supervision, orchestrations and arrangements by Pulitzer Prize-winner Tom Kitt (“Next to Normal”). The Tony Award-winning scenic design by Christine Jones and the Tony Award-winning lighting design by Kevin Adams will also be featured in the tour.

Winner of two Tony Awards, “American Idiot” is the story of three boyhood friends, each searching for meaning in a post 9-11 world. Through incredible spectacle, thrilling performances and with the hope embodied by a new generation, “American Idiot” has given Broadway audiences the time of their lives night after night since its Broadway run at the St. James Theatre (March 2010 – April 2011) and its subsequent national tour, which launched December 2011 in Toronto.

“Since its inception, audiences have been surprised by the emotional journey the show takes them on, told almost exclusively through Green Day’s songs, including many they are already familiar with and love,” said Tom Hulce, producer. “This is such a potent time for our country and the search of our characters for what to believe in is gorgeously celebrated through Billie Joe and Green Day’s wonderfully lush score,” he added.

“American Idiot” premiered at Berkeley Repertory Theatre in September 2009 and played through November of that year. In April 2010, the musical opened on Broadway where reviews were unanimously positive with Charles Isherwood of the New York Times calling the show “the most adventurous musical to brave Broadway in the past decade” and the Toronto Star naming it “the first great musical of the 21st century!” The current national touring company played a 10-week U.K. engagement from October to December 2012.