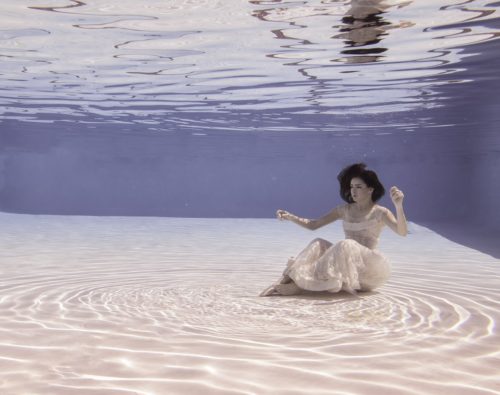 In Greek mythology, Eurydice was an oak nymph and one of the daughters of the god of music and light Apollo. She was the wife of Orpheus, who tried to bring her back from the dead with his enchanting music.

Eurydice play focuses on a unique and modern retelling of the classic Greek myth of Orpheus and Eurydice, as seen through the female perspective. The audience is taken on an enchanting, allegorical journey from the land of the living to the depths of the underworld. The story centers around a young woman who has died a tragic early death, only to be reconnected with her father in the underworld. All of the monumental father-daughter moments are captured so eloquently in this play: teaching a child to read, reminiscing over family stories, and giving a daughter away at her wedding. Eurydice transitions into womanhood, as she leaves the comfort and protection of her father’s arms to begin her new life with her husband Orpheus. With heartfelt themes of music, love, loss, and discovering your own truth, Eurydice will make the audience leave the theatre feeling emotionally moved and imaginatively nourished.

Sarah Ruhl is one of the most innovative and celebrated playwrights of our time, recently honored with this year’s prestigious Steinberg Distinguish Playwright Award.

Her plays have been described as poetry or love letters to the world.

The production will be directed by Dhyana Dahl, interim artistic director of Oceanside Theatre Company. She recently directed the theatre’s productions of “Baby With the Bathwater” and “Seussical, Jr.”

Performance dates are February 10 to 26 at The Brooks Theatre, 217 N Coast Highway in Oceanside (Fridays and Saturdays at 7:30 pm; Sundays at 2:00 pm). This production features live musicians, a captivating lighting design, original art work, and a stellar cast of professional actors.