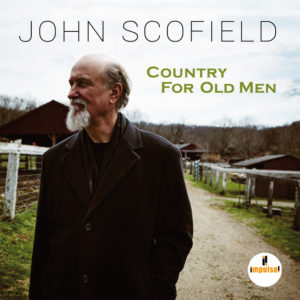 Coming off a Grammy win earlier this year for his last album, Past Present, John Scofield has been largely in the spotlight over the last year, sitting in the with The Roots on “The Tonight Show with Jimmy Fallon,” gracing the cover of Downbeat and garnering the attention of NPR.

His impressive 40-plus-year career has seen Scofield masterfully tackle multiple genres as well as several eclectic collaborations with everyone from Grateful Dead bassist Phil Lesh, to Government Mule and Medeski, Martin and Wood, not to mention his own groups.

Next up for the acclaimed guitarist is an exploration into his strong country and folk roots with Country For Old Men. The new Impulse!/Verve Label Group release out September 23 is Scofield’s homage to such greats as George Jones, Dolly Parton, Merle Haggard, James Taylor and Hank Williams among others. Country for Old Men has Scofield playing alongside accomplished colleagues Steve Swallow, Larry Goldings and Bill Stewart, and was produced by Scofield himself.

A tireless live performer who tours the world approximately 200 days per year, John Scofield will once again hit the road in September for an international tour in support of the new album. Dates span major cities in the U.S. and Europe, including a week-long run at New York City’s famed Blue Note among other stops in Chicago, Detroit, Boston and more.

One of the most distinctive and versatile modern jazz guitarists, John Scofield’s capacity to play in fusion, funk, blues, bebop, country, drum-n-bass, avant-garde and pop settings while retaining his distinctive voice is peerless. In addition to leading numerous ensembles and recording more than three dozen albums as a leader, Scofield has played with a “who’s who” of jazz greats that include Charles Mingus, Miles Davis, Chet Baker, George Duke, Joe Henderson, Billy Cobham and Herbie Hancock, among others. In 1998, the Montreal International Jazz Festival gave Scofield its prestigious “Miles Davis Award.” John Scofield was also awarded Officier de l’Ordre des Arts et des Lettres in France. Although 2016 was the first time he took home a Grammy Award, he was also nominated twice prior.

When not touring the world, he is also an Adjunct Professor of Music at New York University.