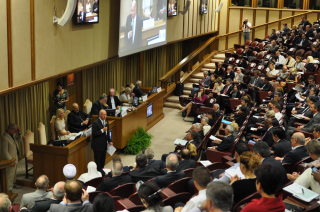 VATICAN CITY–Speaking on the first day of the Vatican’s symposium on climate change and modern slavery hosted by the Pontifical Academies of Sciences and Social Sciences, California Governor Jerry Brown urged the world’s mayors to “light a fire” and join California in the fight against climate change.

“We have fierce opposition and blind inertia. And that opposition is well-financed, hundreds of millions of dollars going into propaganda, into falsifying the scientific record, bamboozling people of every country. We have to fight that propaganda and overcome the inertia and the tremendous opposition,” said Governor Brown. “Mayors, you are at the bottom of this power chain and you have got to light a fire. We have to join together. We have to make a change. It’s up to us to make it happen.”

Governor Brown’s remarks came during the first day of the Vatican’s symposium, which aims to drive awareness, dialogue and action at the local level on climate change and modern slavery – two pressing, interconnected issues highlighted in the pope’s recent encyclical.