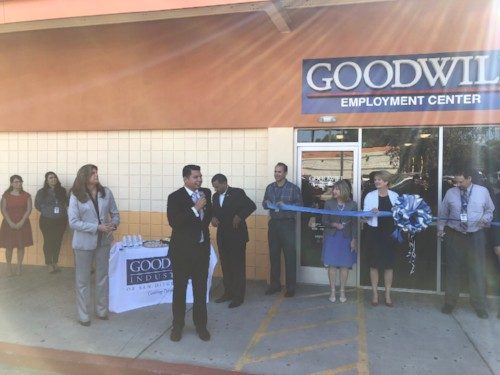 SAN DIEGO–In December 2017, Civic San Diego (CivicSD) closed a $12.6 million New Markets Tax Credit investment to Goodwill Industries of San Diego County to fund improvements to the two buildings in San Ysidro to repurpose them as an outlet center and a distribution facility and to make improvements to an existing storefront in San Ysidro to add a Community Employment Center.

Goodwill Industries unveiled to the community the new employment center that it calls its starship in the south bay.

“We are very grateful to Civic San Diego for helping us financially support this project through the funding of New Market Tax Credits,” said Toni Giffin, Goodwill San Diego’s President and CEO.

Congress established the New Markets Tax Credit program in 2000 to drive investment in both businesses and real estate projects in low-income communities. The program attracts investment capital to these communities by allowing corporations and individuals to receive a credit against their Federal income taxes in exchange for making direct equity investments in entities such as CivicSD. With the new Goodwill facilities, for instance, CivicSD provided $12.6 million in New Markets Tax Credits that were then purchased by Capital One to provide flexible financing to support the acquisition of buildings and the tenant improvements to open the new outlet store and employment center that will be a benefit to the San Ysidro community.

CivicSD is actively working to identify qualifying projects to receive this type of investment. In order to qualify, a project must be located in, or directly benefit, a low-income community by creating quality jobs, or providing goods or services to low-income persons. This form of financing is intended to provide no more than 20 percent of a project’s total cost, and is best suited for large capital projects of $8 million or more.