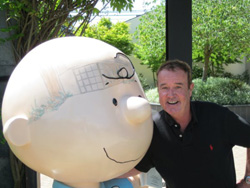 Charlie Brown, the star of Charles Schulz’s Peanuts comic strip and one of America’s most beloved cartoon characters, was first voiced by University of California, San Diego alumnus Peter Robbins.

Robbins, who graduated from UC San Diego in 1979, attended Comic-Con two years ago and had a great following. “People get ecstatic when they discover I was the voice of Charlie Brown,” he said. “Everybody identifies with Charlie Brown ­– he’s a lovable loser and everyone knows what it feels like to be unlucky.” He added fans ever tire of hearing Robbins’ trademark scream of “AAUGGGHH!!” or utter “Good Grief!”

UC San Diego is known for its Noble laureates and cutting-edge research, but the university also has produced many alumni with successful careers in the entertainment industry. Robbins, Rubenstein and Thom Sherman, executive vice president for the CW network, are just a few of the many UC San Diego graduates who are members of the UCSD Alumni Entertainment Alliance. The alliance is comprised of alumni working at all levels in television, film, music, theater, gaming, performing arts, and media.