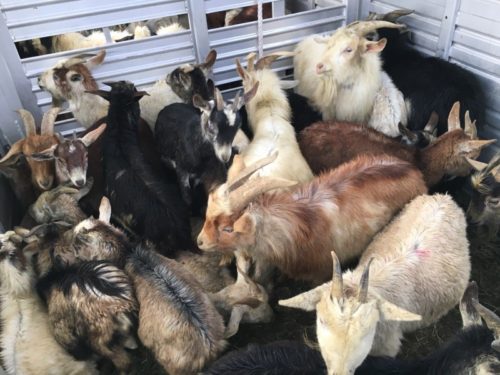 Surviving goats were seized from a property in Jamul. Photo: County Animal Services

Animal control officers went to the property after receiving reports of dead goats, according to Animal Services. They found nine dead goats and 52 goats that were thin or severely underweight. Officers believe the dead goats may have starved to death. One found lying down and was unable to get up. Due to its health it may not survive.

The surviving goats were taken to the county’s animal care facility in Bonita. Some of the animals were pregnant and one gave birth during the trip. Some had overgrown hooves that needed to be trimmed and what appeared to be upper respiratory infections, Animal Services reports.

The animals were evaluated by veterinary staff and will be given medical attention and put on a proper diet to bring them back up to the proper weight.

One found lying down at the property was unable to get up and may not survive.