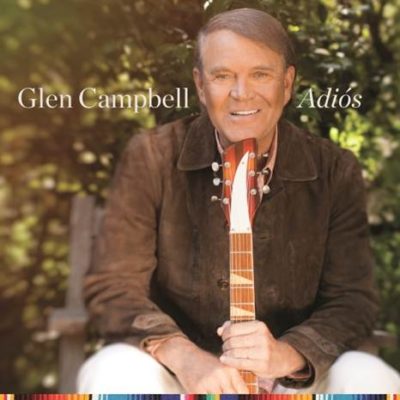 LOS ANGELES–Legendary singer and guitarist Glen Campbell’s final studio album, Adiós, will be released June 9 on UMe, capping off an extraordinary career that has spanned more than five decades and 50 million albums sold. The album will be released on CD, vinyl and digitally and is available for pre-order beginning today.

Adiós was recorded at Station West in Nashville following Campbell’s “Goodbye Tour” which he launched after revealing he had been diagnosed with Alzheimer’s disease. The album was announced today via People.com with an exclusive statement from Kim Campbell, Glen’s wife of 34 years. In her touching notes, Kim reveals the genesis of the album, details the recording process and explains why Adiós is finally being released.

Kim writes: “A new Glen Campbell album coming out in 2017 might seem a bit odd since he hasn’t performed since 2012, and even more odd – if not absolutely amazing – when you consider that he has Alzheimer’s disease. Glen’s abilities to play, sing and remember songs began to rapidly decline after his diagnosis in 2011. A feeling of urgency grew to get him into the studio one last time to capture what magic was left. It was now or never.” She concludes, “What you’re hearing when listening to Adiós is the beautiful and loving culmination of friends and family doing their very best for the man who inspired, raised, and entertained them for decades – giving him the chance to say one last goodbye to his fans, and put one last amazing collection of songs onto the record store shelves.” Head over to People.com to read Kim Campbell’s full note as well as hear the album’s first track, “Everybody’s Talkin’,” Campbell’s take on the Fred Neil-penned hit made famous by Harry Nilsson in the film “Midnight Cowboy.”

For Campbell’s final recording session, Glen and Kim turned to Glen’s longtime banjo player and family friend Carl Jackson to helm the production, play guitar and help his old friend. In preparation for the recording, Jackson, who joined Campbell’s band in the early ‘70s as an 18-year-old banjo player, laid down some basic tracks and vocals for Campbell to study and practice. Jackson encouraged him every step of the way and although Campbell struggled at times because of his progressing dementia, he was clearly ecstatic about being in the studio.

The 12-track collection features songs that Campbell always loved but never got a chance to record, including several from Jimmy Webb, his longtime collaborator behind some of his biggest hits like “Wichita Lineman” “By The Time I Get To Phoenix,” and “Galveston.” In addition to the bittersweet title track, Adiós, first popularized by Linda Ronstadt, Campbell also sings Webb’s longing love song “Just Like Always” and country weeper “It Won’t Bring Her Back.” He revisits “Postcard From Paris” with his sons Cal and Shannon and daughter Ashley singing the line, “I wish you were here,” resulting in a powerful and heartfelt message of a family singing together one last time.

Adiós sees Campbell putting his spin on several classic songs including “Don’t Think Twice It’s All Right,” inspired by Jerry Reed’s version of Bob Dylan’s timeless tune and “Everybody’s Talkin’, a banjo-filled take on the song that Campbell never recorded but famously performed on the “Sonny and Cher Show” in 1973 with a 19-year-old Carl Jackson. Campbell’s daughter Ashley plays banjo on the song and joins her dad on several tracks on the album. Other songwriters featured include Roger Miller with “Am I All Alone (Or Is It Only Me),” which begins with a home recording of Miller singing the tune at a guitar pull before going into Campbell’s rendition with Vince Gill on harmonies, Dickey Lee’s honky tonk heartbreaker “She Thinks I Still Care” and Jerry Reed’s Johnny Cash hit “A Thing Called Love.” Willie Nelson joins his old pal for a poignant duet of Nelson’s 1968 “Funny How Time Slips Away” while Jackson tells Campbell’s life story in “Arkansas Farmboy.” “I wrote ‘Arkansas Farmboy’ sometime in the mid- to late-‘70s on a plane bound for one of the many overseas destinations I played with Glen between 1972 and 1984,” reveals Jackson. “The song was inspired by a story that Glen told me about his grandpa teaching him ‘In The Pines’ on a $5 Sears and Roebuck guitar when he was only a boy. That guitar led to worldwide fame and fortune, far beyond what even some in his family could comprehend.”

Adiós was a labor of love and a way for Glen Campbell to have one more chance to do what he loves to do and leave a musical gift for fans. Campbell, who turns 81 on April 22, is in the final stages of Alzheimer’s disease. He lives in Nashville where he is surrounded by his loving family and getting the very best of care.

In a legendary career that spanned more than five decades, Glen Campbell created an indelible mark on American pop culture as a beloved musician, singer, movie star and television personality. From his time as a groundbreaking guitarist for Elvis Presley, Frank Sinatra, The Beach Boys and many others in the archetypical backing band The Wrecking Crew to his decades atop the charts to the grace he showed as he closed his career while fighting Alzheimer’s disease, there are few artists who have touched as many lives as the Rhinestone Cowboy.

Before announcing his retirement from the studio and stage in 2013, after half a century of recording and touring, Campbell had won most every award and achieved every milestone available to musicians. Born in 1936 as the 12th child and seventh son of a dirt poor sharecropper, Campbell rose from his humble beginnings in rural Delight, Arkansas to become one of the best-selling solo male artists in U.S. chart history. The global superstar released more than 70 albums, selling 50 million copies with more than 80 songs charting. He achieved chart-topping, platinum-selling success in the arenas of pop and country music, bridging the two worlds and bringing country music to the masses as one of the genre’s first crossover stars. Testament to his widespread appeal that spanned generations and genres, borders and language barriers, his musical accolades were dizzying: 21 unforgettable Top 40 hits, including two No. 1’s; 27 Top 10 Country singles, six Top 20 albums, including the double-platinum classic, Wichita Lineman, and nine No. 1 country albums.

Campbell’s musical and entertainment lifetime is unmatched for its prolific breadth, popular appeal – and flat-out musical accomplishment and achievement. His biggest run of hits (“Gentle on My Mind,” “By the Time I Get to Phoenix,” “Wichita Lineman,” “Galveston,” “Rhinestone Cowboy,” a signature song that became his theme in many ways, and “Southern Nights,” just to name a handful) put him in the pop elite of the ‘60s and ‘70s, erasing the line between pop and country and helping pave the way for generations of others.

A six-time Grammy winner, Campbell made history in 1967 with his first Grammy wins by sweeping the song and performance awards in both the pop and country and western categories. “By the Time I Get to Phoenix” won the pop honors and “Gentle on My Mind” took the two country and western trophies. Those two songs and “Wichita Lineman” are in the Grammy Hall of Fame. A member of both the Country Music Hall of Fame and the Musicians Hall of Fame, Campbell won Country Music Association’s Entertainer of the Year, twice won the Academy of Country Music’s Album of the Year award and was named Male Vocalist of the Year by both. In 2012, he was bestowed the Grammy’s most prestigious honor, a Lifetime Achievement Award.

Campbell’s striking good-looks and country charm made him an instant television success with his variety series, “The Glen Campbell Goodtime Hour.” Seen in millions of homes across the U.S. for four seasons, Glen Campbell became a household name and a true celebrity. The show’s broadcasts in Great Britain, Australia and Singapore introduced him to an even wider audience and catapulted him to worldwide fame. Campbell also moved into the world of film as the hand-picked co-star of John Wayne in the movie “True Grit.” His eponymous song for the soundtrack was nominated for an Academy Award and he was nominated for Most Promising Newcomer at the Golden Globes.

But even at his popular peak, few were aware of the full extent of his credentials as a first-call session guitarist whose much sought-after musicianship as a member of The Wrecking Crew – widely considered one of the most successful session recording units in music history – helped shape Phil Spector’s famed “Wall of Sound” and The Beach Boys’ most creative works. After thrilling Brian Wilson with his talent, Campbell later became a touring member for a stretch when Wilson first retired from the road in 1964. Alongside musicians like Leon Russell, Carol Kaye and drummers Hal Blaine and Earl Palmer, Campbell played on an astounding 586 sessions in 1963 alone. His memorable guitar parts can be heard throughout the Beach Boys’ landmark Pet Sounds album, Frank Sinatra’s “Strangers in the Night,” the Righteous Brothers’ “You’ve Lost That Lovin’ Feeling” and the Monkees’ “I’m a Believer,” not to mention hits by Elvis Presley, Bobby Darin, Lou Rawls, Ricky Nelson, Merle Haggard and Bobby Vee.