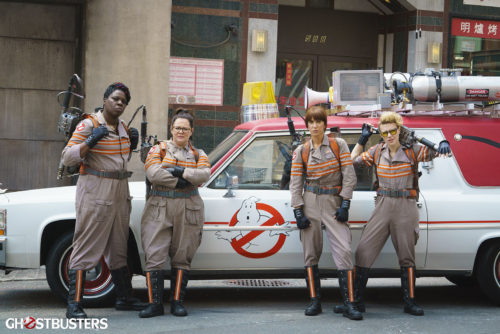 LOS ANGELES – When Ghostbusters was originally released in 1984 it was a special-effects blockbuster which combined a cunning dialogue movie, in which everybody talked to each other like they had common sense and intelligence who were also in on the joke. The movie starred Bill Murray, Dan Aykroyd, and Harold Ramis, three highly acclaimed actors who at the time had enough comedic acting gigs under their belts to sustain Ghostbusters to box office success.

Ghostbusters makes its long-awaited return, rebooted with a cast of hilarious new characters.  Thirty years after the beloved original franchise took the world by storm, director Paul Feig brings his fresh take to the supernatural comedy.

McCarthy, Wiig, McKinnon and Jones are funny, but they’re not afraid to reveal that they’re also quick-witted and intelligent; their dialogue puts nice little spins on American clichés, and it uses understatement, irony, in-jokes, vast cynicism, and cheerful goofiness. The special effects required painstaking detail work and kudos to the stunt men and women for performing astronomical feats.

Comedy requires impulsiveness and improvisation; or at least that’s what it should feel like, no matter how much work has gone into it. The heroines in Ghostbusters managed to brilliantly pull off a run-away summer ghoulish movie that somehow finds some kind of precarious balance between insanity and accuracy, between cheerfully wretched supernatural ghouls spitting green goo all over you, to reproduce the most revealing nuances of human behavior.

The movie has a lot of neat effects, some of them mind-boggling, others just quick little throwaways, similar to one of my favorites in the original when a transparent green-slime monster gobbled up a mouthful of hot dogs. No matter what effects are being used, they’re placed at the service of the actors; instead of feeling as if the characters have been carefully posed in front of special effects, we feel they’re whizzing this escapade as they go along.

Naturally, the idea for another Ghostbusters – as a sequel – was one that had been explored for quite a while. “I’ve always wanted to do another sequel,” says Ivan Reitman, who directed and produced the first two iconic films in the franchise, and now produces the new film with Amy Pascal.  “It’s one of those movies that you should revisit and I was really hoping that I could do it. But unless we all agreed on something, it wasn’t going to get done. Getting four people – especially these four people – to agree was kind of impossible. And then, unfortunately, we lost Harold.”

With the passing of Harold Ramis in 2014, the studio and Reitman began to look for a new comedic talent to take the helm of a future film. That’s when Feig entered the picture.  “I knew they’d been trying to put together a sequel for a long time,” says Feig. “I started wracking my brain. Funny people fighting the paranormal is still the greatest idea ever, and it felt like there was still so much to explore outside the worlds of the first two films. I thought, ‘How would I do it?’  Well, I’d make it with the four funniest women I know. That excites me, because it makes it something new.”

“Paul has been intent on doing a big tent pole movie with women, but it was hard to figure out the right film, with the right cast – the chemistry had to be right on every front,” adds executive producer Jessie Henderson, who is Feig’s producing partner. “We took our first stab at that with Spy, but his idea for Ghostbusters was an opportunity to take it to an even bigger level, with special effects, visual effects, and the ensemble cast.”

Reitman was also excited about the opportunities for comedy in Feig’s idea. “What’s really exciting about Paul’s take is that it’s not about the gender,” he says. “It’s the friendship of four particular characters as they do something extraordinary.”

With the studio and Reitman in his corner, Feig teamed with Katie Dippold to co-write the screenplay. “There was only one person I wanted to write this with, and that was Katie,” says Feig of his co-writer on The Heat. “I’ve worked with her on other projects and I know she loves ghost stories. She loves scary movies.  It was a match made in heaven.”

“At first, we spent a lot of time talking about what we wanted the script to be,” says Dippold. “There were so many different creative debates – what elements of the original do you want to see again?  What should feel new? Then we talked about the story and the characters.  Nobody wanted to do remakes of the original characters – Venkman will always be Venkman.  So we came up with four new characters of our own.”

“Paul was intent on making a movie that lived up to the spirit of the original but had a new reason for being,” says Amy Pascal.  “It always comes down to the characters, and that is what Paul has always been brilliant at creating.”

It was in this way that Feig approached the film as an entirely new story as a new team answers the call. “I wanted the movie to start with our world today – a world that has never seen ghosts that we can prove,” says Feig. “Our Ghostbusters have dedicated their lives to scientifically proving ghosts exist, but they’re considered loonies, because there’s no physical proof.  But when they actually get to see the ghosts they’ve been trying to see for their whole lives, they’re going to prove that their whole lives’ mission was correct.  They all have this common goal, and they complement each other.”

So, Dippold and Feig created new characters who would mesh well as a team. He explains: “Abby is the paranormal expert; she’s dedicated her life to studying ghosts. Erin is the physicist, who tries to bring a scientific grounding into it. Holtzmann, the engineer, can take the concepts that Abby and Erin come up with and actually build the physical equipment to fight them. And finally, Patty joins the group as the newcomer who knows the ins and outs of New York City, which will be one of the keys to solving where the ghosts are and what’s happening to Manhattan.”

“You’ve seen men as comedic eggheads but not since Elaine May in A New Leaf have women been portrayed as funny scientists,” says Pascal. “It was a fresh and unique take on the material that needed to be told.”

But writing the characters as complementary was only half of the challenge – Feig also had to cast the roles with actors who were hilarious and could bring them to life. Into these roles, Feig cast Melissa McCarthy as Abby, Kristen Wiig as Erin, Kate McKinnon as Holtzmann, and Leslie Jones as Patty.

“I think the reason why Melissa is one of the most successful comedians working today is that she brings an everyman quality to her work,” says Reitman. “She brings great energy, great truth – she has a quality of being very funny and very real. People love her because she’s here to represent them. 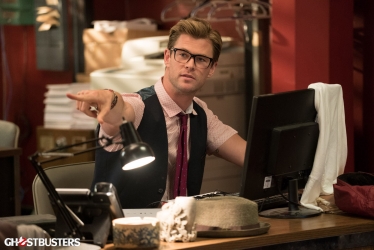 In the new GHOSTBUSTERS movie, actor Chris Hemsworth holds down the office as “Kevin,” the hunky and good looking secretary.

When it came to casting the role of Erin, Feig says McCarthy was already on board, which led to what seems like a first go-to candidate in her Bridesmaids co-star. “Kristen’s name just kept coming up,” Feig says, “but I didn’t even know if she’d want to do it, because she’s been showing what a great actress she is in so many dramas lately. Then, out of the blue, my wife was talking to Kristen and she said, ‘Oh, I know Paul’s doing Ghostbusters, and if he’d ever want me to do any little part in it, I’d love to.’  That was music to my ears, because Kristen would be so good in this role. She’s really one of the funniest people in the world – she makes me laugh and always has.”

“For the role of Jillian Holtzmann, we needed an actress who could go outside the box,” Reitman states. “I saw the extraordinary sketches in which Kate McKinnon plays Justin Bieber, and captures his essence in a totally original hilarious way.  For Ghostbusters, she brings a unique, quirky, comedic energy to her role that is perfect! Kate is a comedic force to be reckoned with.”

For the final role, Feig was struck by lightning. “I first saw Leslie Jones do a ‘Weekend Update’ segment.  About a minute into her bit, I sat up and said to my wife, ‘That’s one of our Ghostbusters,’” says Feig. “We met, and we bonded over the fact that we both started in standup at about the same time, in the 1980s. She’s such a big personality, but it’s sincere – she’s so passionate about everything she does.  She commands the screen as Patty Tolan.”

But one other reason why these four actresses were right for the roles was that beyond their individual talents, Feig knew they would blend well as a team, creating a whole that was even stronger than its individual components. “That’s why it was important to me to cast actors who were friends in real life, because when you do that, you get a level of camaraderie, realness, and warmth between them that you don’t sometimes get when you put actors together who don’t know each other,” Feig continues.

Feig further elaborated: “It’s always been important to me – it’s one of the reasons why I think Bridesmaids worked so well. Kristen and Melissa were Groundlings together, did Bridesmaids and ‘Saturday Night Live’ together. Kate and Leslie are on ‘Saturday Night Live’ right now. All four of them have worked together in various projects, and they all have a very different sense of humor that complements each other: Kristen is just so good at that contained, neurotic comedy that she keeps very fun; Kate is such a physical comedian, but has this inner oddness, providing the movie with a weirdo energy; Leslie is just an explosion that comes onto the set; and Melissa is the leader of the pack. You’re really getting four very distinct characters, four very distinct personalities, whom also happen to be able to kick a lot of ghost ass.”

Ghostbusters makes its long-awaited return, rebooted with a cast of hilarious new characters.  Thirty years after the beloved original franchise took the world by storm, director Paul Feig brings his fresh take to the supernatural comedy, joined by some of the funniest actors working today – Melissa McCarthy, Kristen Wiig, Kate McKinnon, Leslie Jones, and Chris Hemsworth. This summer, they’re here to save the world!  The film is produced by Ivan Reitman and Amy Pascal, and written by Katie Dippold & Paul Feig, based on the 1984 film “Ghostbusters,” an Ivan Reitman film, written by Dan Aykroyd and Harold Ramis.