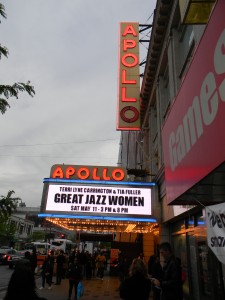 Geri Allen’s May 11, 2013 “Great Jazz Women Of The Apollo” played before sold-out audiences.

HARLEM, NEW YORK – Motéma Music recording label composer, pianist, and jazz educator, Geri Allen, fulfilled a decade old dream to bring to the word’s attention the enormous contributions to the American art form of notable jazz women icons. That dream was fulfilled in Allen’s hit musical production, The Great Jazz Women Of The Apollo, held at the Apollo Theater, May 11, 2013, which was accompanied with electrifying performances by a talented bunch of musicians, singers, and dancers.

The hit parade reeled on seemingly forever in a dramatically thorough but musically vibrant and nostalgia trip back to the glory days of the Apollo Theater, where an unassuming three-story building took the world by storm when it first opened in 1913 by launching the careers of such American jazz, blues, and R&B icons as Ella Fitzgerald, Betty Carter, Nina Simone, Nancy Wilson, Dinah Washington, Billie Holiday, Sarah Vaughan, Bessie Smith, Aretha Franklin and Mary Lou Williams, just to name a few.

Under the musical direction of Allen, the show was created to pay homage to the great women singers and instrumentalists who graced the Apollo Theater stage. Before the sold-out audience could even settled in their seats, they were being dazzled by a sing-off/duet between the stage band called the Timeline Quartet (featuring GRAMMY® winner Terri Lyne Carrington, drums/percussion, Kenny Davis, bass, Kassa Davis, drums, Marvin Sewell, guitar, and Allen on piano), singers Lizz Wright, GRAMMY® winner Dianne Reeves, and the vocal ensemble group Afro Blue. Tap dancers Maurice Chestnut and Alexandria Bradley joined throughout the show performing riveting tap dancing techniques. 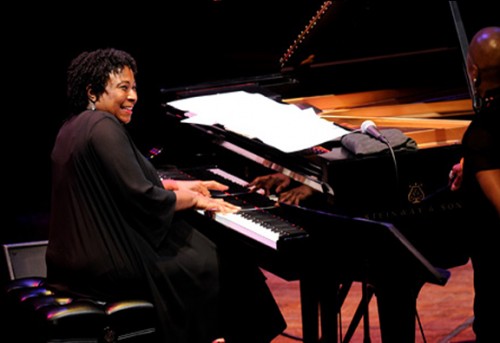 Our history guide on this busy joy ride through the Apollo of the late 1930s thru ’70s, and the show’s principal character, is Karen Malina White, a talented television and movie screen actress who did a good job in moving us from one scene to the next. White and her co-host of women singers, Lizz Wright, Dianne Reeves, and saxophonist Tia Fuller, served as mentors, teachers, and performers to a fictional young aspiring singer, Khanya, played by Shacara Rogers from Afro Blue.

Great Jazz Women Of The Apollo, directed by S. Epatha Merkerson and written by Farah Jasmine Griffin, guided the Khanya character by using the mentors to educate her and the audience of the significance of Betty Carter’s Little Red Top, and Nina Simone’s Feeling Good, which were superbly performed by Afro Blue. More than 25 songs were performed in the show as concert versions by Wright and Reeves, accompanied by Allen and Timeline Quartet. 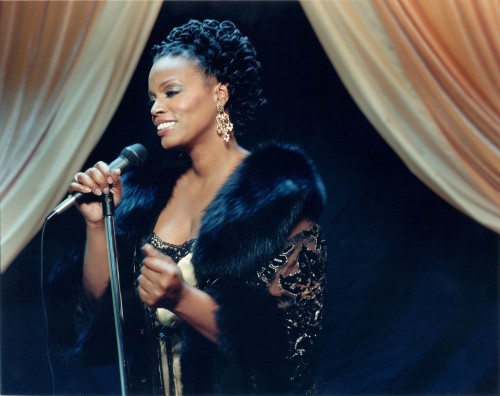 When Blue Note Records artist Dianne Reeves sings jazz and blues there are very few on her level period! As demonstrated in her rendition of Sarah Vaughn’s version of I’m Glad There Was You, she is a superior interpreter of lyrics and possessed a warm voice. The original song was written by Jimmy Dorsey and Paul Madeira (sometimes credited as Paul Mertz) and first published in 1941, and has become a jazz and pop standard. Reeves unabashedly succeeded in capturing every member of the audience. She was very cool and seductive in singing every line, every note, with as much ornamentation her chops could muster.

When singing Nina Simone’s See Line Woman, this one had special meaning to the 56-year-old songstress. Reeves have always regarded Simone as a key influence, in the same manner that most female singers since the thirties have cited Billie Holiday and Ella. Reeves followed Simone’s technique of interpolating elements derived from various musical idioms – all of this was on full display in this selection. She cleverly rewrote the melodies and even the harmonies of the song, but I doubt if Simone would have complained – brilliant arrangements by Reeves and Geri Allen. 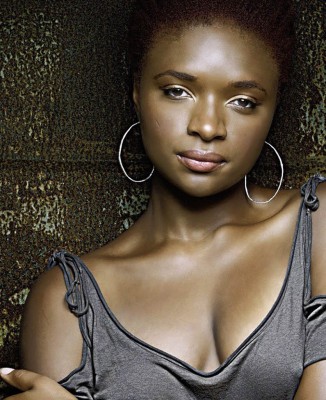 The 33-year-old Verve Music Group artist Lizz Wright, is a jazz/R&B singer and composer who has been on the jazz/R&B circuit since the late 1990s, and has made impressive strides in showcasing her enormous talents. Lizz delivered stellar performances particularly in stirring up the crowd with Aretha Franklin’s Chain of Fools.

Here we have the classic Lizz Wright who is clearly established in the blues and a genuine jazz singer. When Lizz sings a song she always personalizes it – like when she sang Bessie Smith’s Ain’t Nobody Business If I do, which is an eight-bar vaudeville blues song that became an early blues standard. It was written in the early 1920s by pianists Porter Grainger, who had been Bessie Smith’s accompanist, and Everett Robbins. The song was first recorded October 19, 1922 by Anna Meyer with the Original Memphis Five.

Ain’t Nobody Business If I do is the perfect backdrop to observe how fascinating it is how Reeves and Wright veer off into similar yet different destinations from their common starting point. Lizz’s approach to this classic is introspective; she is the kind of inwardly directed vocal artist who entreats the audience to come to her, to find her where she is. Reeves is gloriously extroverted, and when you see and hear her sing – as in the Ella Fitzgerald version of the popular jazz standard, I’m Beginning To See The Light, written by Duke Ellington, Don George, Johnny Hodges, and Harry James, and published in 1944, you can’t help but be pulled in to her charm and in awe of her cleaver wits of vocal techniques.

However, if there is one singer who can be said to truly belong to jazz, R&B, and pop, it is Lizz Wright. She is thoroughly steeped in the vocabularies of jazz soloists and the blues as attested by her stupendous rendition of Billie Holiday’s version of the1928 popular song, Embraceable You, with music by George Gershwin and lyrics by Ira Gershwin. Wright sang this wonderful lullaby with her own interpretation of the melody and assistance from Geri Allen’s arrangements, with some of the notes and rhythms adjusted to fit the contours of her smooth and silky chops. The tendency for most singers is to emphasize the last note of the first line, “My heart grows tipsy in me -You and you alone,” but Lizz places an emphasis on “grows tipsy, and cuts the “in me” off surprisingly quickly, letting it fall away like a blues singer would. That my friend is raw steel talent! 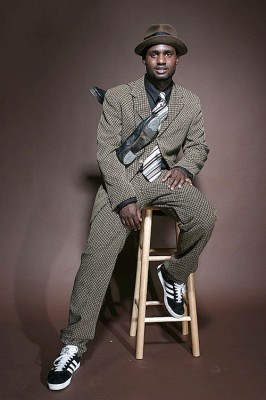 The 27-year-old dancer and choreographer Maurice Chestnut is already a veteran of Broadway and stages the world over; as an 18-year-old in 2002, he danced in the Tony-winning Bring In da Noise, Bring In da Funk, and has won Showtime at the Apollo three times. Chestnut has revealed himself over the years to be a choreographer who can create dance that is permeating with what that great dancer Ben Vereen would call, “pure and articulate power.” With just a word of suggestion — “buck and wing,” “Charleston,” “Nicholas Brothers flash” — Chestnut can capture lost eras without losing his own rap-informed tap style. In Great Women Of The Apollo, Maurice demonstrated the Charles “Honi”Coles technique, which Coles perfected and is simply tap dancing of extraordinary elegance whose personal style and technical precision epitomized the class-act dancer.

As demonstrated in a number of dance selections in the show, Maurice likes to use the whole foot when he taps, not just the cliché of toe-ball-heel. He “hits” his tap sounds (“hitting” is a key Savion Glover technique), but he also swirls the sides of his feet, he goes up on his toes, comes down on his heels, he leaps and lands hard, or sends a trail of taps whispering across the small area he utilized – sometimes literally jumping off the small platform with sheer gusto to back it up. Maurice showed us the Nicholas Brothers’ (Fayard and Harold Nicholas) swag yall!

Chestnut is among the very few in this business of tap who has a distinctive swagger that you can groove with — but it’s a heavy groove. Maurice loaded his bar, dropped his heels and hit unusual accents and syncopations, which is a move made famous by the immortal tapper himself, the late John Bubbles, who literally open the door of modern jazz percussion back in the 1930s. Throughout the entire show, Maurice was able to show the audience the versatility art of tap — how many things tap can express — joy, the blues, fun, anger, and labor.

Geri Allen has proven time and time again she is a force to be dealt with. With a deluge of talent and wisdom she learned from her parents growing up in Detroit, and listening to the spirits of the jazz giants of the Apollo, Allen is one the strongest candidates of her generation for enduring recognition as a pianist, improviser, jazz educator, and composer.

In summing up what Great Jazz Women Of The Apollo is all about – Geri Allen had these words to share prior to the opening of the show: “I am humbled to share the stage with such an amazing group of artists, and I feel very privileged to be collaborating with S. Epatha Merkerson, and Farah Jasmin Griffin, both brilliant trailblazer’s in their respective fields,” reflects Allen.

“Laura Greer at the Apollo has given us a wonderful opportunity to pay tribute to the beloved Grand Dames of the Iconic Apollo Theatre, while acknowledging the significant contributions being made by our present day great jazz women. These women are authentically connected to this time-honored legacy, and it is so very gratifying to join them on stage in celebration and song,” Allen concluded.