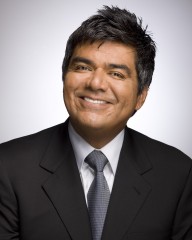 A kidney transplant recipient, Lopez is being recognized for his leadership in raising awareness of kidney health issues and his dedication to improving the lives of those burdened by kidney diseases through the work of the George Lopez Foundation. He will receive the award in a ceremony at the society’s annual meeting, ASN Kidney Week 2015, in San Diego on November 5.

“ASN applauds the work of Mr. Lopez and the George Lopez Foundation to better the lives of individuals with kidney diseases,” said ASN President Jonathan Himmelfarb, MD, FASN. “His compassion and dedication to increasing awareness of the importance of kidney health and organ donation is inspiring, and ASN values his commitment to the kidney community.”

“I am honored and humbled to be receiving this prestigious award from the ASN,” said Lopez.

Lopez has a deep personal interest in kidney disease. Diagnosed with a genetic kidney disease in 2004, he received a kidney transplant in 2005. His experience led him to cofound the George Lopez Foundation to create positive, permanent change for underprivileged children, adults, and military families confronting challenges in education and health, as well as increasing community awareness about kidney disease and organ donation. He currently serves as the President of the Foundation, which sends 250 kidney kids and their families to Summer and Fall Family Camps annually.

Lopez’ multifaceted career encompasses television, film, standup comedy, and late-night television. He co-created, wrote, produced, and starred in the groundbreaking hit sitcom George Lopez, which ran for six seasons on ABC. For two seasons, he hosted Lopez Tonight, a late-night talk show on TBS. One of the entertainment industry’s premier comedic talents, he is the founder of Travieso Productions, a film and television production company.

Time Magazine has recognized Lopez as one of the 25 most influential Hispanics in America, and his entertainment industry work was recognized with a star on the Hollywood Walk of Fame in 2006, the ADCOLOR Industry Coalition’s All-Star Award, and the 2015 Best Actor Imagen Award. For his charitable work, Harvard University honored him with its Artist of the Year and Humanitarian Award, and People for the American Way bestowed its Spirit of Liberty Award.

ASN Kidney Week 2015, the largest nephrology meeting of its kind, will provide a forum for more than 13,000 professionals to discuss the latest findings in kidney health research and engage in educational sessions related to advances in the care of patients with kidney and related disorders. Kidney Week 2015 will take place November 3 to 8 in San Diego.

Founded in 1966, and with nearly 16,000 members, the American Society of Nephrology (ASN) leads the fight against kidney disease by educating health professionals, sharing new knowledge, advancing research, and advocating the highest quality care for patients.