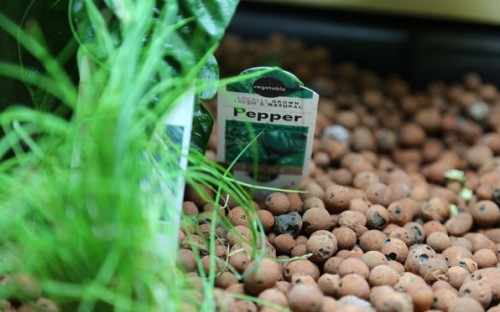 SAN DIEGO–There’s no dirt in this garden. And its ‘powered’ by fish poop.

The last part is a sure fire way to get kids as young as kindergarten interested in this unique type of gardening. The aquaponics garden at the Fallbrook Community Center teaches kids about growing fresh produce and eating healthy.

“If it looks cool to kids, they’ll probably check it out,” said Ashley Westbrook of the San Diego County Parks and Recreation Department.

Adults are plenty curious, too, and visitors to the community center often ask questions about the garden.

The set-up is part aquarium, part garden. The lower half is a 50-gallon water tank that constantly recycles water into the garden sitting a few feet above it. The tank is home to several golden tilapia, whose excrement becomes the nutrients the plants depend on.

“The plants are in clay pellets that are there to hold the plants up,” said Westbrook. Because the fish are providing the nutrients directly in the water, no dirt is needed.

The curiosity factor gets visitors talking and the community center has made videos to share with schools and community groups.

“That was the main intent of the garden,” she said. “We wanted to raise awareness about sustainable gardening and healthy eating with Fallbrook residents.”

Kids in the center’s after-school enrichment program and summer camps tend the garden. It’s pretty low-maintenance but it gives kids of all ages a chance to help grow the garden’s produce that they will eventually consume.

“We use the produce from the aquaponics garden and our outside garden in our healthy cooking classes,” Westbrook said.

“What I’d eventually like to see is for kids to just come in and grab a snack right off the vine.”

Different kids are chosen to monitor the plants’ progress (aquaponics plants grow nearly twice as fast as their ground planted counterparts) or perform the few tasks needed to maintain the garden.

The fish are fed twice a week, the water gets tested weekly for pH levels and whatever evaporates is replaced.

“They take total care of it,” said Westbrook. “We also take the seeds from what’s harvested and replant them.”

It’s not the only aspect of the garden that teaches children about the cycle of life. The fish play a part in that aspect as well.

Westbrook has been preparing the children for the eventual fate of the fish in the tank. The tilapia along with the plants are part of the food chain, providing a healthy meal for people.

“Once their little friend gets big enough, we’ll have fish tacos,” she said. New fish will take their place in the tank, and the cycle will begin again.