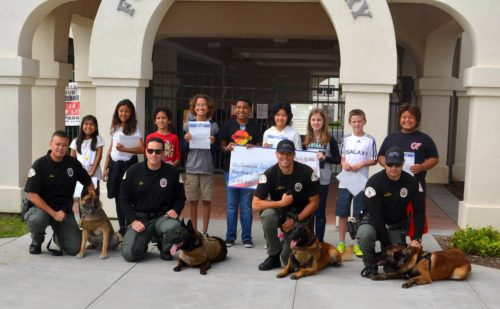 OCEANSIDE–The Oceanside Police Department Canine Unit received a donation to the Canine Fund from the Foussat Student Council toward the purchase of a ballistic Canine Vest.

The Foussat Student Council, based at Louise Foussat Elementary School in the Oceanside Unified School District, raised over $900 during the course of the school year. The students were given the option of spending the money on themselves (a party or field trip) but instead chose to donate the funds to the OPD Canine Unit.

The Oceanside Police Department says it is grateful to have community support, especially from the local students.

In 2015, the Oceanside Elks Lodge #1561 donated funds to purchase two ballistic vests for the program. Additionally, a donor who wished to remain anonymous donated funds to purchase another vest. With the current donation from the Foussat Student Council, all four Oceanside Police Department canines will now be outfitted with this important piece of safety equipment.

The vests, purchased from Ray Allen Manufacturing, weigh approximately four pounds each and are designed to provide protection of vital organs from gunfire. The vests can be used in a variety of dangerous situations, including the service of high risk search warrants, deployment with the Oceanside SWAT team on missions, and dangerous calls in a patrol capacity.