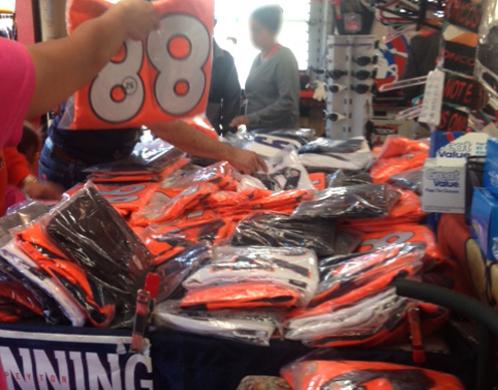 The charges allege that Marc Alan Misko, 62, Mitchell Jay Misko, 62, David Brian Henrichsen, 51, and Glenn Ford, 63, operated a business selling counterfeit sports merchandise at the Mile High Flea Market from Nov. 14, 2006 to Jan. 10, 2015. The merchandise was falsely marked and identified as official merchandise for the Denver Broncos and other Denver professional and college teams as well as teams based in other cities throughout the country.

“These significant criminal charges are recognition of the successful criminal investigation conducted by Homeland Security Investigations special agents,” said David Thompson, special agent in charge of HSI in Denver. “This investigation uncovered hundreds of thousands of dollars in money wired to China to finance these counterfeit products and more than 20 shell companies furthering this illegal activity. Not only do these counterfeiting organizations produce inferior merchandise, which is sometimes dangerous, these counterfeits also hurt legitimate businesses in the United States, which can hinder job growth and support criminal organizations around the world.”

All four defendants are charged with operating a criminal enterprise of trademark counterfeiting in violation of the Colorado Organized Crime Control Act (COCCA). The charges allege hundreds of acts of money laundering, conspiracy and solicitation to commit money laundering dating back to November 2006.

Mitchell Misko, of Westminster, is charged with one count of violation of COCCA and two counts of money laundering.

Ford, of Denver, is charged with one count of violation of COCCA and four counts of money laundering.

Marc Misko, Mitchell Misko and Ford turned themselves in to the Northglenn Police Department and are set for return on bond Aug. 17. Henrichsen turned himself in to the Douglas County Sheriff’s Office and is set for return Sept. 6. All were released on $20,000 bond.